So, my little girl is six and last night she participated in her first high school Homecoming. Yes, six. Yes, Homecoming.

Since her school is K-12, they have a tradition of having a Flower Girl and Crown Bearer from the elementary school as part of the court. Typically they choose teachers’ kids for this, so Miss Madeleine got asked to do it this year.

So literally 10 stores and over $100 later, we had white tights, a white dress, white shoes (note: the only place to find white dress shoes after Labor Day is David’s Bridal), a white hair bow, and a white headband (couldn’t pick between the two). Hair appointment was made (I’m terrible at doing hair). Half-day personal day was approved.

Yesterday morning was “the day.” I was envisioning this special beautiful day in which my little girl would be thrilled to turn into a princess. She would smile at the crowds and give them her best pageant wave. She would float on clouds and ride a unicorn into the sunset. So I went a little overboard with my expectations.

First event: Parade. She actually enjoyed that since she got to ride on an antique fire truck and throw candy.

Next was the Pep Rally at the upper school. The entire school was invited to it. I think the lower school kids were a little overwhelmed by the noise and craziness. My extrovert little girl turned shy.

Once the pep rally was over, my mom and I took Madeleine to get her hair done. She’d decided she wanted to wear the headband, so we just went to get her hair curled. (I know you’re thinking I could do that myself, but seriously, it would look terrible. Plus her hair does not hold curl well, and I don’t have one can of hairspray in this house!) In my mind, I had pictured smiles and excitement – her princess makeover was beginning! Instead, I got this:

The girl literally frowned for the ENTIRE 30 minutes we were at the salon. I got a smirk out of her for the finished product: 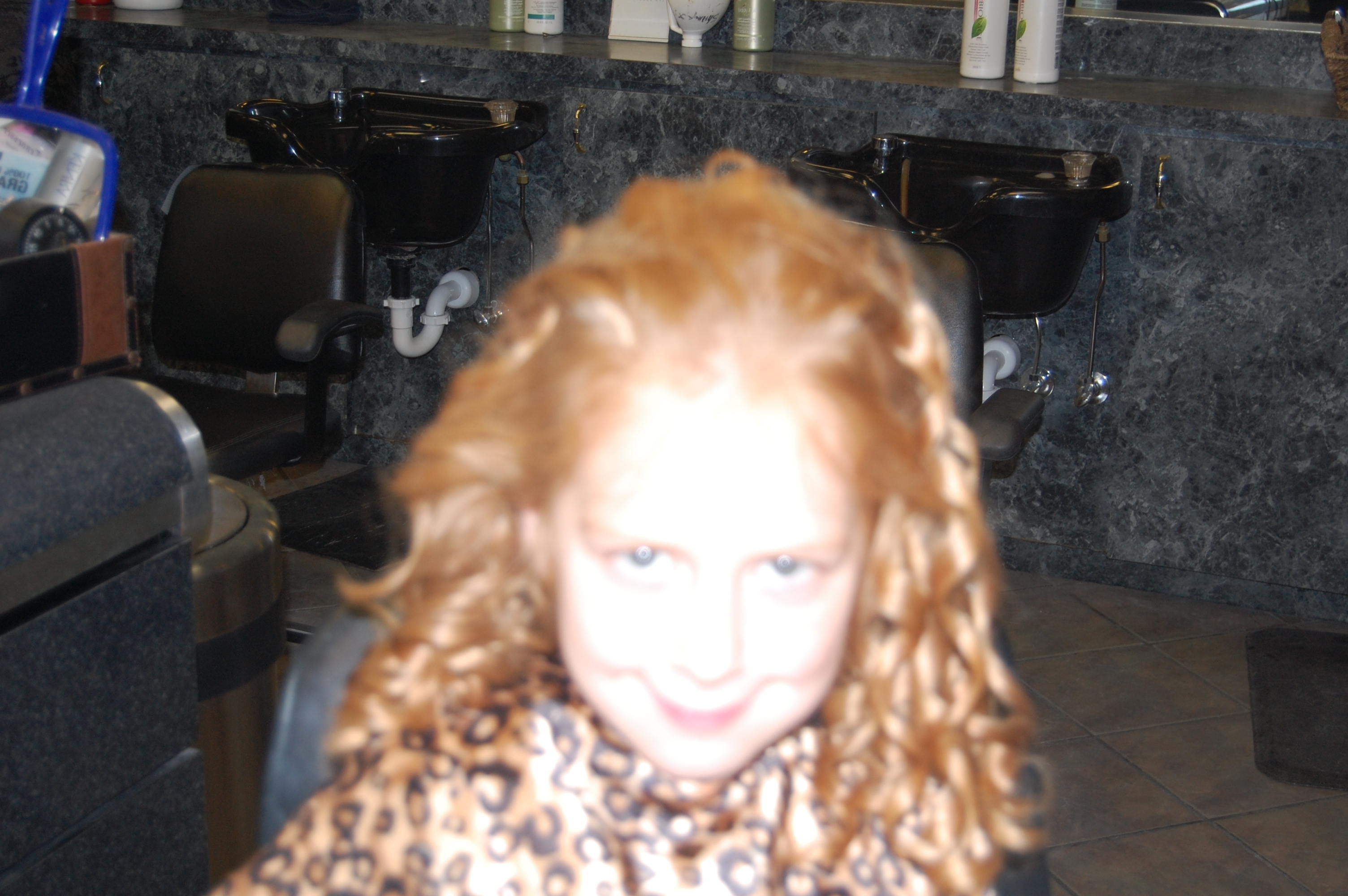 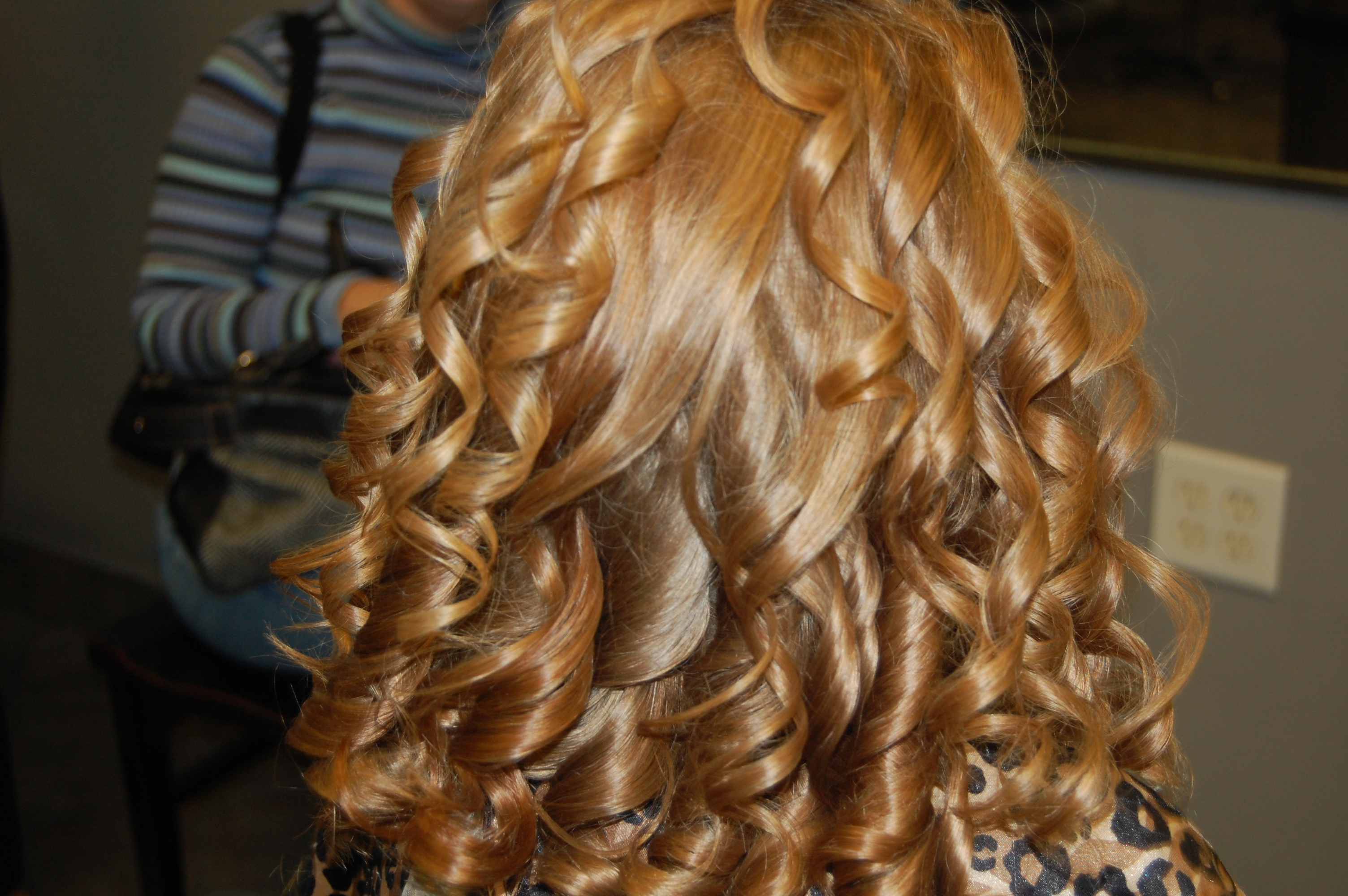 I told the stylist I needed these curls to last until 7:00 PM. She was like, “Oh, they’ll still be in tomorrow morning!”
I knew better. But I didn’t say so. (Just because I can’t resist, though, I was right. Her hair is back to straight this morning.)

Next stop: McDonalds for “dinner” (it was like 3:15 at this point) and then back to school to get dressed in Daddy’s classroom. During the drive, there was still lots of attitude from the princess. Still mad about getting her hair done. Or maybe about having her picture made every 2 seconds.

And there it was. Putting on the fancy dress switched on the smiles. On to pictures next – good grief, it was like a wedding!!! My pictures were sort of from the side, so a ladder was in most of them, but you get the idea. Oh, and the headband worked great, but then they gave her a Flower Girl gift, and it was a tiara, so we switched to that. It was perfect! 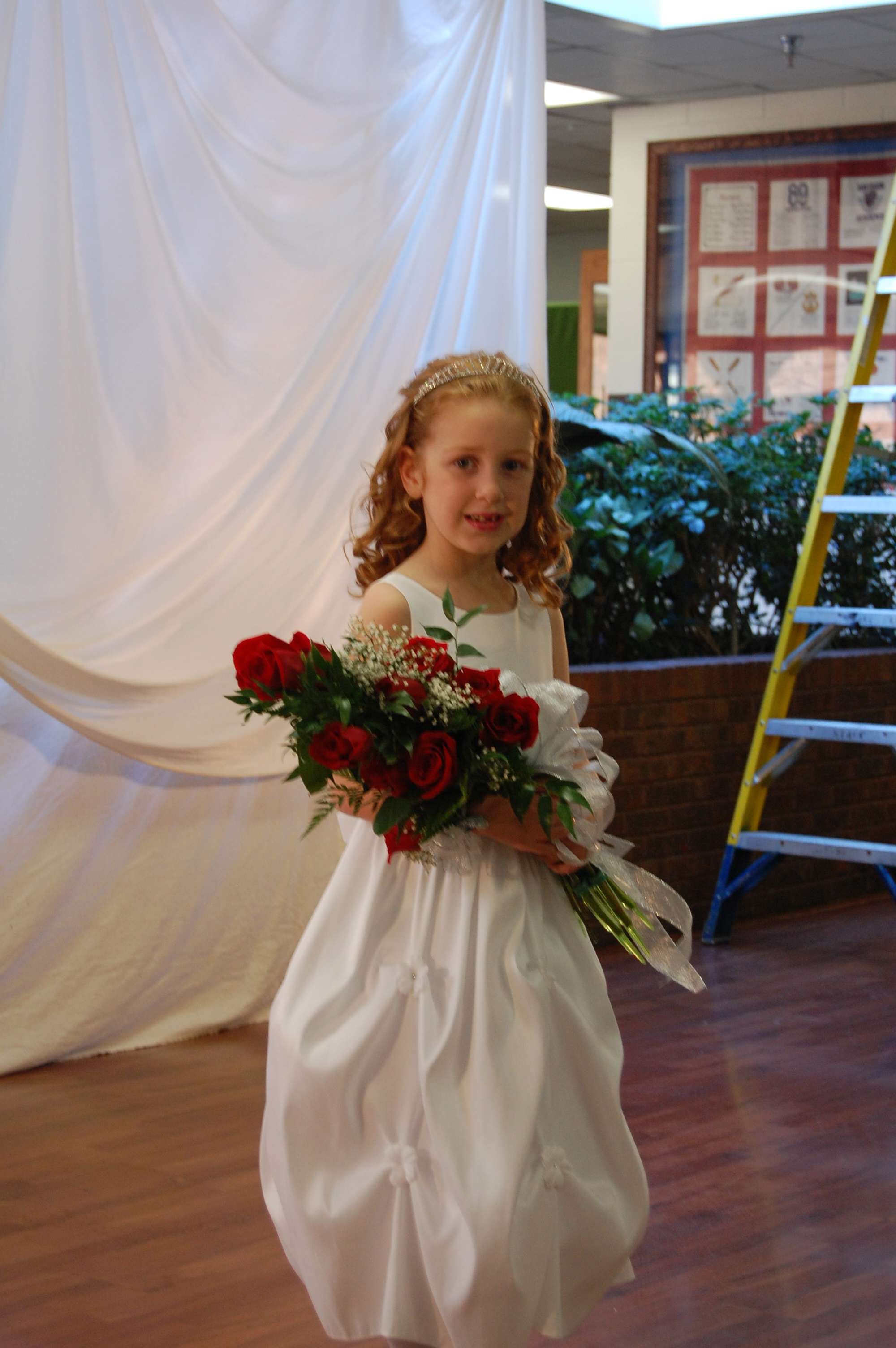 Finally after 40 minutes of pictures (I have to credit Mad for being good through all this) it was on to load up in the cars! 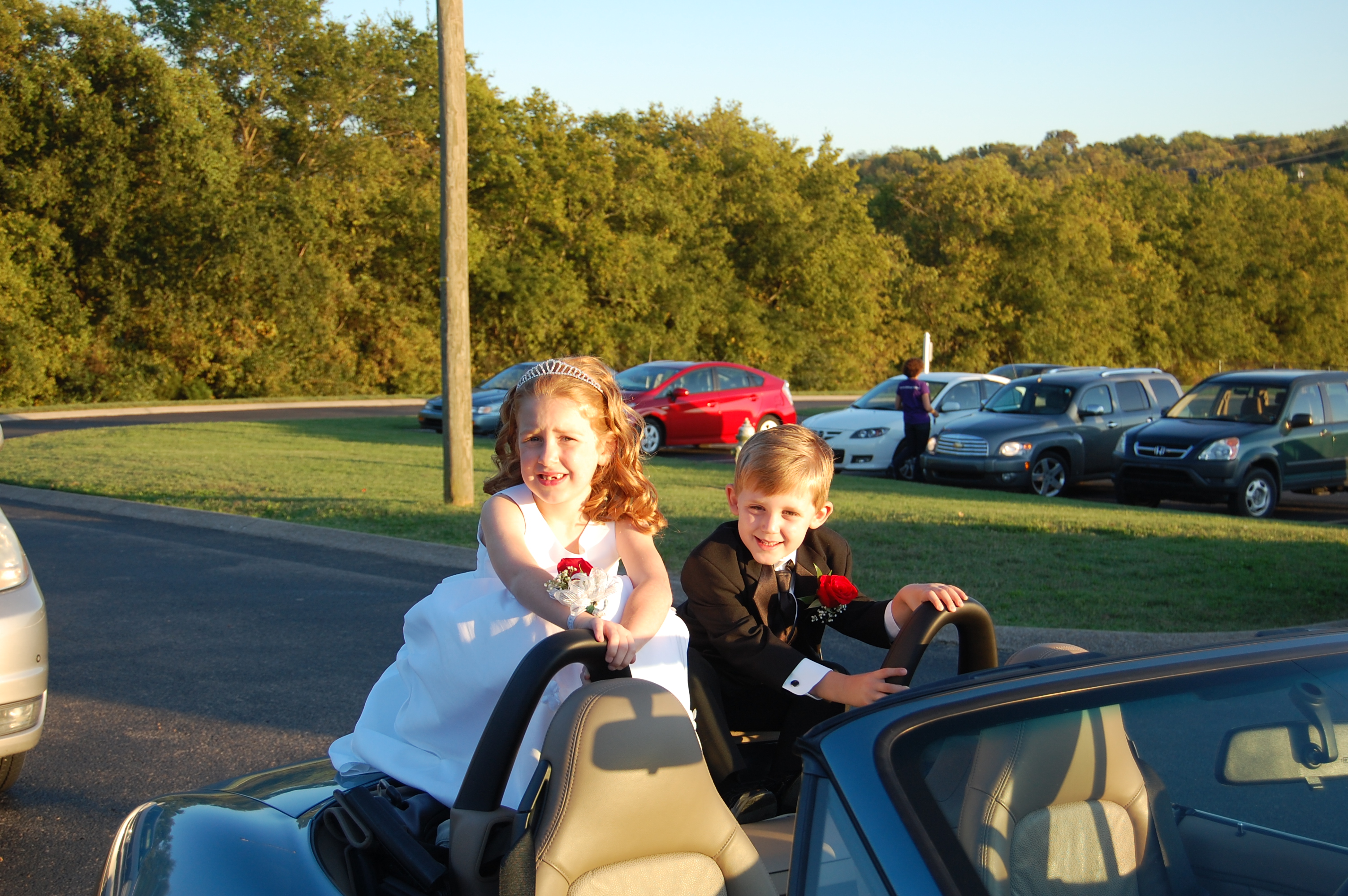 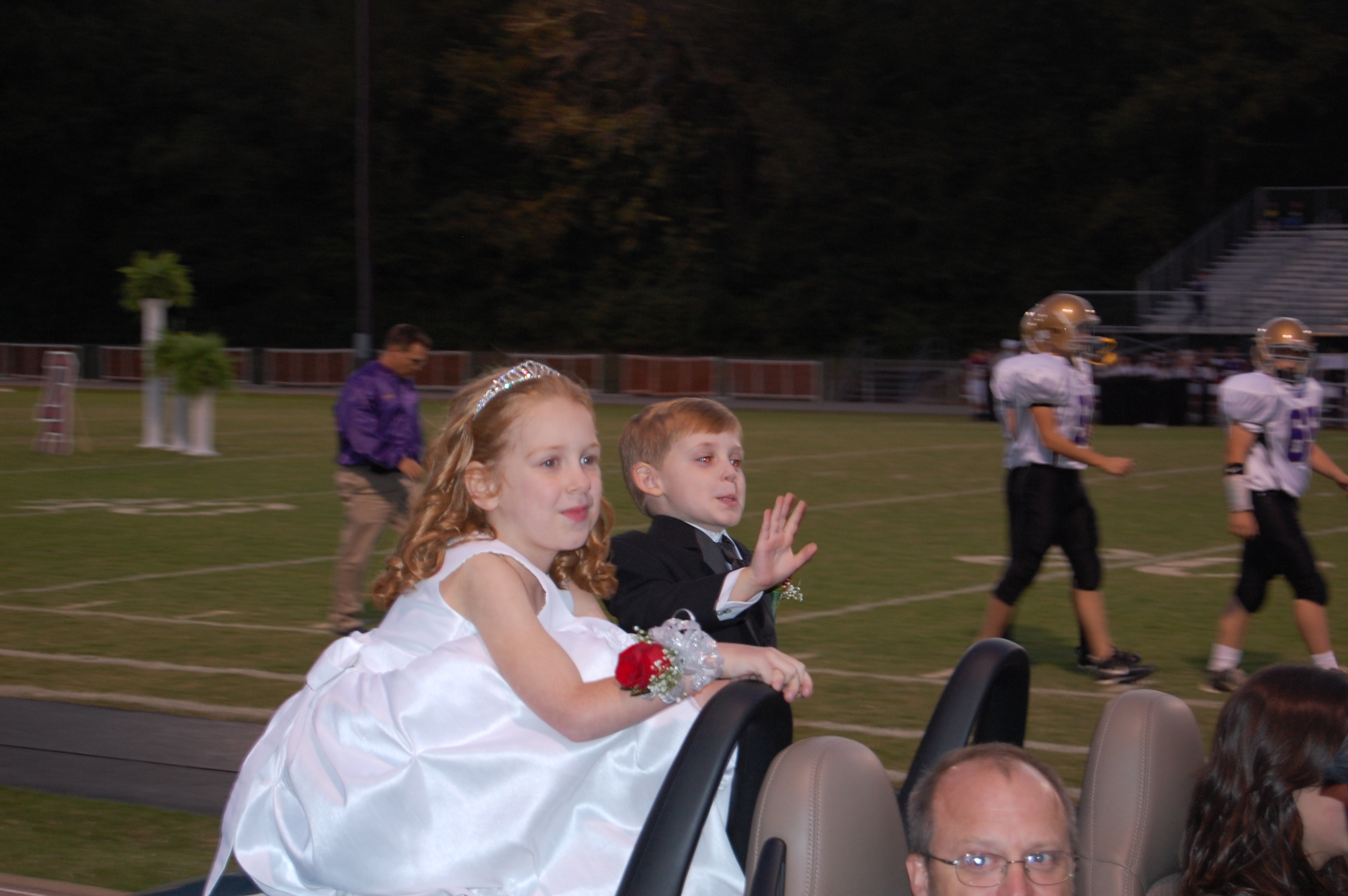 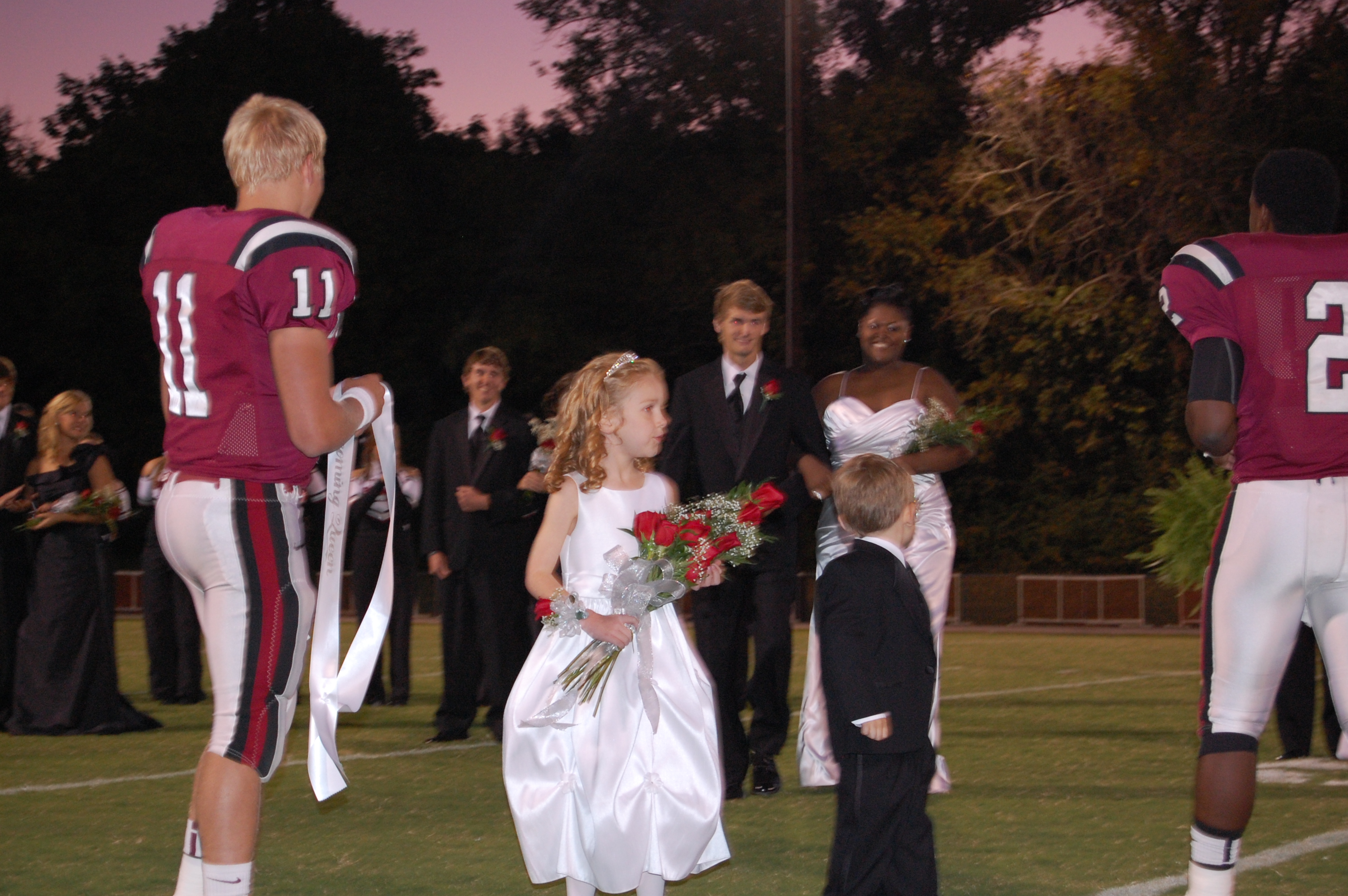 And the biggest smiles came AFTER it was all over!

Madeleine was ready to get out of the dress and run around with her friends next to the football field. She did keep the tiara on, though. 🙂