We just got back from a vacation in Florida. The first few days were just beach/pool days, and despite some rain, we got several hours at the beach each day. 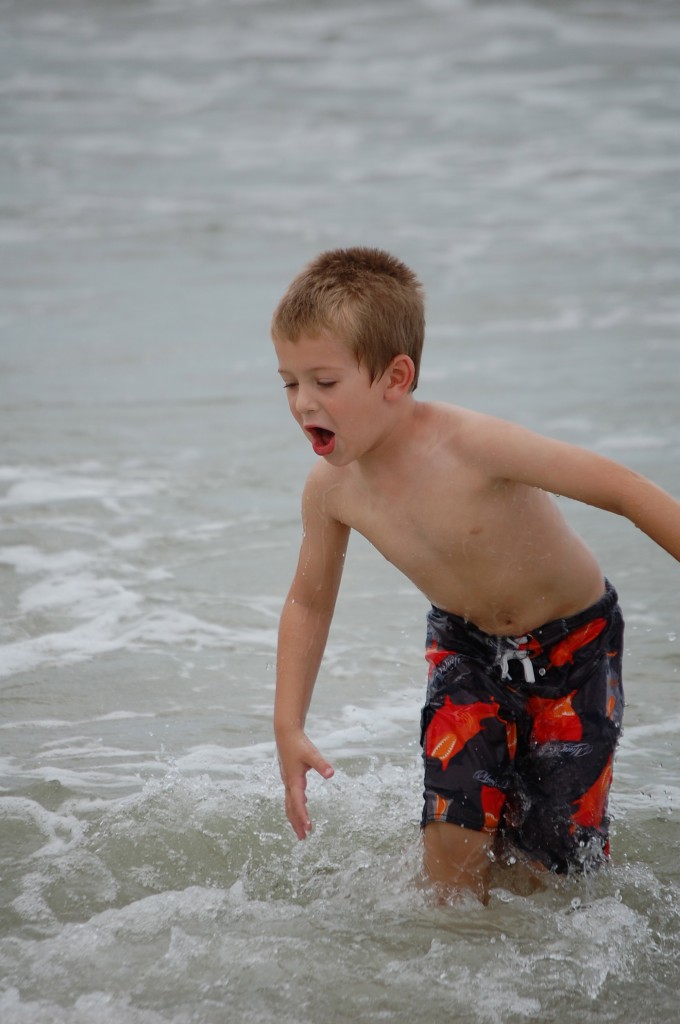 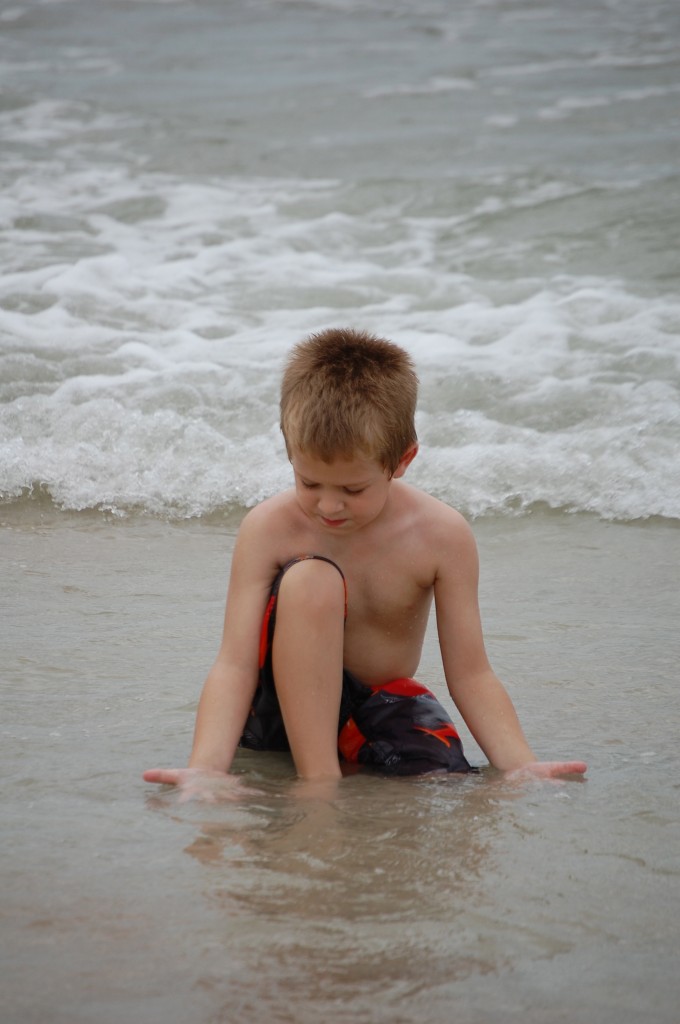 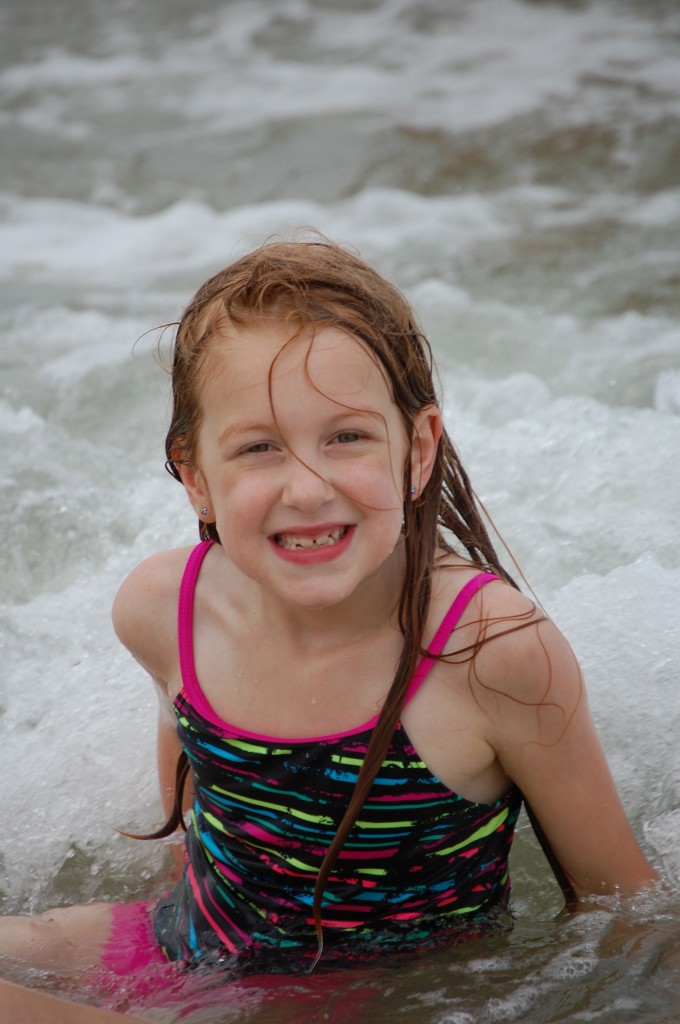 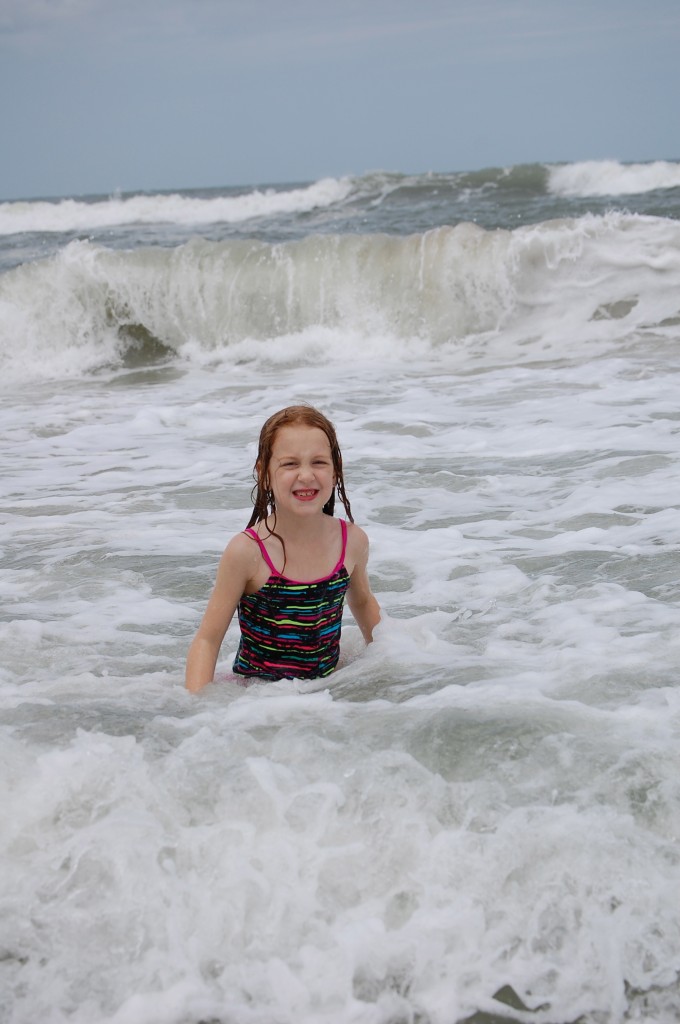 Then we headed to Orlando to hit Islands of Adventure. Steven and I had been dying to go to the Harry Potter section! We were actually in Orlando two years ago the day the HP section opened, but the lines to get in the park were so insanely long!! We stood there for a an hour and never made it to the gate to get in. So we ended up just going to the Universal Studios side. You can understand how excited we were after waiting for 2 years!!

For the most part, the Wizarding World of Harry Potter was FABULOUS!! I mean, who doesn’t want to go inside this: 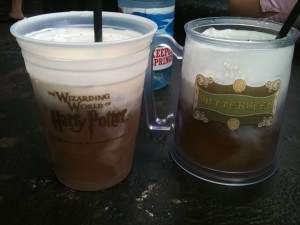 And yes, it tastes awesome. I was expecting a strong butterscotch taste, but it wasn’t that strong. It was a nice blend of butterscotch, caramel, and – um, root beer or cola flavor, maybe? We saw the Hogwarts express, bought chocolate frogs at HoneyDukes, and saw a working wand presentation at Ollivander’s. Though the kids couldn’t ride the Dueling Dragons roller coaster ride (now called Dragon Challenge), we rode the Hippogriff (little roller coaster) and rode the Forbidden Journey ride, which is the one in the castle. One of the best parts of this ride is actually going through the line in the castle. You start outside the castle in the greenhouse (they had REAL pitcher plants hanging everywhere – impressed!) and then you wind your way around the castle. You see the portrait gallery with talking pictures, the Defense Against the Dark Arts classroom (complete with a hologram of Harry, Ron, and Hermione), Dumbledore’s office (complete with a talking Dumbledore hologram), the fat lady at the entrance to Gryffindor tower, and even the Sorting hat!

Then you get into one of these: 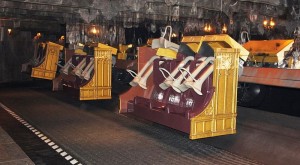 The cars don’t stay on a track the whole time, though, like the Haunted Castle at Disney World. They move onto individual hydraulic lifts (as in, it feels like you’re flying in mid air the whole time) and take you through this part-big screen, part-scary props re-enactment of the HP movies. There are some pretty scary parts – spiders and Dementors and such. But the scariest thing that happened was that while we were on it the ride STOPPED. Our car had us tilted back in mid-air. We just sat there as the  minutes wore on, realizing with terror that we were strapped in and could not get out of those seats on our own. Madeleine started to panic. I held her hand and comforted her as best I could. We felt very alone. Like I said, it wasn’t like all the cars were close to each other. We were not even within speaking distance of the next car. My mind raced as I tried to stay calm: Surely they have emergency procedures for this. Surely they can unlock us so we can get out of these seats and they can safely get us down by ladder or net or something. Fortunately, after about 10 minutes (though it felt much longer), the ride started up again. But by that point, the kids were scared and freaked out. They had lost their love for this ride.

Later in the day, we returned to the HP section and Steven and I decided that we would each take a turn in the Single Rider line of the ride while the other spouse waited with the kids. There was no way we were getting the kids back on the ride. I went first, got through the line quickly, and got in a car with a dad and his two sons. However, the dad was kind of a big guy, and his safety guard would not go down all the way and click. So a worker told him and his boys to get out of the car. I was like, “I don’t want to be on here by myself!” She said, “You’ll be fine!” and pulled down my safety guard.

I was in a 4-person car by myself. Please God, I prayed, Please don’t let the ride stop this time. Well I don’t know if God wanted a laugh or was too busy to hear me or what, but literally 5 seconds after praying that THE RIDE STOPPED. This time it was much harder not to panic. I had no one with me. Luckily it only stopped for about a minute this time, but I was deflated. I just couldn’t enjoy the ride. I closed my eyes for a lot of it. I wonder what the picture people thought when they saw a picture of this lone rider, eyes closed, looking like she just wanted the ride to end.

Despite the Forbidden Journey drama, we had a great time. The kids even got replica wands – Madeleine picked Ginny Weasley’s wand, and Ephraim picked Harry Potter’s wand. (Yes, we kidded them about those two characters getting married – they haven’t seen the last few HP movies yet.) I’m looking forward to all the magic-making that I’m sure will be happening at my house . . . .