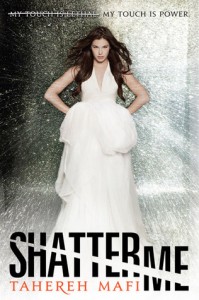 Shatter Me by Tahereh Mafi

I’m reading this on recommendation from my friend Marissa at Rae Gun. (She writes some great book posts, but also is a crafter and seamstress extraordinaire! Check out her blog.)

This is another dystopian novel. I’m on a roll with this type of book this summer. Or maybe it’s just that YA authors are on a dystopian roll. I dunno. Anyway, I’m not far into this book yet, but so far it’s about a girl named Juliette who is basically imprisoned in an insane asylum. When people touch her skin, they get hurt – or even killed. I They’ve just given her a roommate, a guy named Adam, who Juliette thinks she knows from childhood. After 264 days of having only a notebook and pen as her companions, she finally has someone to talk to. Juliette is very interested in what is going on in the world. Adam tells her that the Re-establishment (governing body who is re-structuring society after violence, natural disasters, and hunger almost took over the world) is creating a new language, doing away with books, erasing history – anything they can to re-start. Then one day some soldiers with guns come into her cell and capture her. It turns out that Adam is one of them. I think they are part of the Re-establishment, but I’m not sure yet. Anyway, this group of soldiers is trying to use Juliette as a weapon. Juliette desperately wants to get away, even be killed, rather than to help the soldiers. But the leader is controlling, violent, and sly. And he’s not letting her get away.

That’s all I got so far. Very intriguing! I’ll keep you posted!

What are you reading right now?

And here’s what Karla is reading.