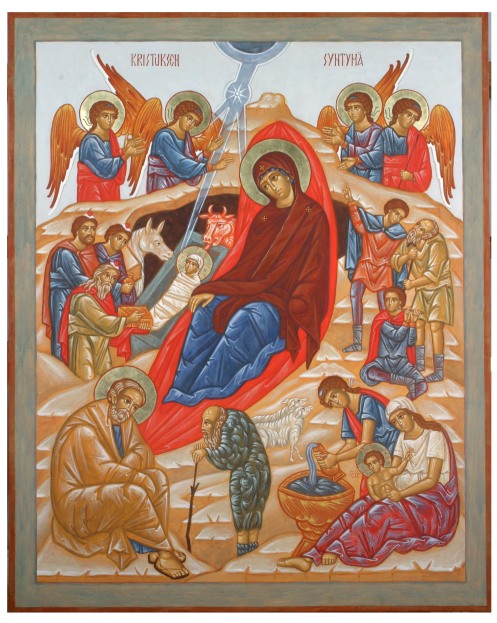 As we celebrate the birth of Christ tomorrow, people all over the world will focus on Jesus, who put on human skin and stepped into our world. Many will remember Mary, who through her obedience became the Mother of God and essentially the first Christian. The Orthodox icon of the Nativity, seen above, is no exception. Mary and Jesus are front and center, flanked by angels, animals, wise men, and shepherds. Yet Joseph plays a part in the story, too.

In the icon, Joseph is not at his wife and new child’s side, fawning over his baby as we would expect him to be. Instead, he sits below his wife, dejected and being approached by a small, old man. That man is the devil, and is trying to convince Joseph that the child indeed cannot be God himself. If he were, why was he born as a human, in a mere cave? Joseph obviously struggles with the idea of the incarnation, with the movements and workings of God, with doubt and questions.

You might want to grab Joseph by the shoulders and shake some sense into him. The Son of God has come into the world, and you’re over here despairing? Wake up! See your son, who is God Himself, the Messiah!

Yet I must admit I’ve been where Joseph is. Perhaps I continue to be there, my faith like a sore hangnail that I can’t rip away, but that never seems to heal. How often I remain in the arms of doubt and cynicism. Especially this year, after the horrific Sandy Hook school shooting, and in the midst of my husband’s grandfather battling cancer again, and in the unrest in Egypt and Syria and elsewhere, and in those whisperings that come into my heart each Christmas reminding me of a time when the family I grew up with was intact. Can I really proclaim God when there is so much sadness in the world?

I want to say yes. I want to close my eyes and know nothing but light, and Him, and love. I want to think on every good thing that remains in the world, and in my life, and know it came from Him. I don’t know how I can do this after being so hunched over and unsettled like Joseph for so long. But I want to try. Like Joseph, my mind can’t comprehend God, but my soul struggles toward a belief in Him. With my shaking voice, I want to come to Him and announce Yes, I adore you, Christ, my Lord.

How is He contained in a womb, whom nothing can contain?
And how can He who is in the bosom of the Father
be held in the arms of His Mother?
This is according to His good pleasure,
as He knows and wishes.
For being without flesh,
of His own will has He been made flesh;
and He Who Is,
for our sakes has become that which He was not.
Without departing from His own nature
He has shared in our substance.
Desiring to fill the world on high with citizens,
Christ has undergone a twofold birth.