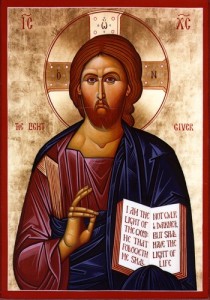 I was surprised to read this article today: Why Jesus Doesn’t Belong in Christmas Decor by Megan Hill. “Our images, in their frailty, diminish God. Since we are inevitably drawn to worship our God through looking at them, images of Christ keep us from worshipping “in spirit and truth” as Jesus himself commands,” she says. Though Megan is correct in pointing out that our human-made images of Jesus are far too limited to truly encompass God and all that He is, I have to disagree with her suggestion that images of Christ take away our ability to truly worship God.

Enter the little-known and little-understood tradition of iconography of the Eastern Orthodox Church. Orthodoxy boasts a long succession of icon-making dating back to Jesus himself. Legend has it that as Jesus was en route to Jerusalem (to be crucified, no less), the King of Edessa sent a message to Jesus, asking him to visit and heal him from an illness. Though Jesus couldn’t go to Edessa, he sent a cloth he had wiped his face with, and when the king received the cloth with the dirt-crusted image of Jesus’ face, he was healed. Thus, the first icon was born. You may question the truth of this story. Though it was written about as late as the 8th century, I cannot point you to a book title or an internet source to prove it. You can take it or leave it, I suppose.

Still, there are records of icons created by Jesus’ peers. St Luke (of the gospel of Luke fame) is credited as the first iconographer to write icons of Jesus and Mary. Icons – or at least symbols and representations of Christ – were present on the walls of the catacombs as early as the 2nd century. By the seventh and eighth centuries, icons were highly prevalent and their users went through a time of persecution during those iconoclast years. Finally, in 843, icons were allowed again when St. Theodora reinstated their use after her husband, who had banned icons, died.

Let’s get back to Megan’s points. She referenced the OT commandments about not making graven images, going on to say:

“The 17th-century theologian Francis Turretin summarizes the command this way: “The making of images is not absolutely interdicted [God doesn’t forbid all representational art], but with a twofold limitation—that images should not be made representing God, nor be employed in his worship.” This is true even of Jesus. Though fully human, his humanity cannot be separated from his divine person, which means visual images of Jesus are, in fact, attempting to picture God.”

Orthodox Christians agree that the divine God cannot be drawn or represented by human art. That is why there are no icons of God in His divinity. God is so far beyond human understanding that we could not capture him on paper no matter how hard we tried. St. John of Damascus said, “How could the invisible be depicted? How could the unimaginable be portrayed? How could one without measure or size or limit be drawn? How could the formless be made? How could the bodiless be depicted in color? What therefore is this that is revealed in riddles? For it is clear that when you see the bodiless become human for your sake, then you may accomplish the figure of a human form; when the invisible becomes visible in human flesh, then you may depict the likeness of something seen; when one who, by transcending his own nature, is bodiless, formless, incommensurable, without magnitude or size, that is, one who is in the form of God, taking the form of a slave, by this reduction to quantity and magnitude puts on the characteristics of a body, depicts him on a board and sets up to view the One who has accepted to be seen.”

The primary thing that all icons point us to is the Incarnation. God made flesh. God, who humbled himself to put on human skin and entered into the world through the womb of a human woman. Since God became human, and, as Megan pointed out, had a true body, we can make an image of Him in His human form. Every icon of Christ reminds us that God became like us so we could become like Him. Every icon reminds us that he bled and sweat and cried and felt pain and mourned and hungered like all of us do. Every icon reminds us that humble, human things can be made holy. If God can put on a human body and still be God, then a piece of wood with an image on it can take on a sacred purpose.

You see, we Orthodox Christians DO use icons as aids to worship. Icons are seen as windows to heaven. We do not look at the icon as much as we look through the icon into heaven. We look to see what the icon represents: A risen Jesus, sitting at His Father’s side. A great cloud of witnesses who have gone before us and are worshipping God alongside us. I use a quote Megan used to prove my point: “A picture of Christ,” writes (John) Murray, “if it serves any useful purpose, must evoke some thought or feeling respecting him and, in view of what he is, this thought or feeling will be worshipful. We cannot avoid making the picture a medium of worship.” No, we cannot avoid it, and we shouldn’t try to. Icons invite us to consider Christ’s love for us and sacrifice for us. When we pray, we don’t have to close our eyes to focus on Jesus. We can look Jesus straight in the face. Though we know we are looking at a physical, human-made icon, it helps us see Jesus spiritually – as the divine Son of God who came to save us.

This leads me to my next point: Orthodox Christians believe that our worship of God is both physical and spiritual. There is a physicality to our beliefs: we cross ourselves to remember the Trinity; we prostrate to remember our humility; we smell the incense, which represents our prayers lifting up to God; we hear the jingle of bells on the censer as the priest swings it to bless us. Worshipping with icons is part of that physical faith. They give Christ and the saints a visual physical form that reminds us of our own bodies, which, like Jesus, and like the icons themselves, can, indeed, be blessed, redeemed, and made holy.

The last point I want to make is in response to Megan’s quote from J.J. Packer: “The heart of the objection to pictures and images is that they inevitably conceal most, if not all, of the truth about the personal nature and character of the divine Being whom they represent.”

While we can certainly argue about what skin color, body type, and clothing are present in a depiction of Jesus, the truth is that we don’t have a photograph of him to prove anything. That is why icons all look similar. The faces, bodies, and clothing in Orthodox icons don’t alter much from saint to saint. Yet Orthodox iconography does, to an extent, help us know the people behind the paintings. For example, St. John the Baptist is often portrayed wearing green, which means he was an ascetic and spent a lot of time outside. He also is depicted with wings to show that (like many angels) he was a messenger, sent to give a message and prepare the way for Christ. In most icons, Jesus is shown wearing a red tunic with a blue shawl draped over at least one shoulder. The red symbolizes divinity, while the blue represents humanity: He is divine, but he was clothed in humanity. Icons of Mary are the opposite: she wears a blue tunic with a red outer shawl. Human, but covered in the Holy Spirit to become the mother of Jesus. I could go on. My point is that there are a variety of details in Orthodox icons that do not conceal, but in fact, reveal the nature, character, and experience of the person the icon represents.

I think that Megan rejects images of Baby Jesus because she doesn’t want a chinsy human replica of a Person who is immeasurably beyond any human reproduction of Him. As she says, “My holy curiosity will be satisfied by nothing less than the truth.” She wants the real deal. I get that.

But I also encourage us all to consider that images of Jesus, no matter how limited by human artistry, can lead us into His presence. During this time of year, I can think of no better way to reflect on the Incarnation than by staring at a candlelit icon of the Nativity, with Mary staring down at her baby in the middle of a cave. In the midst of all that humanity, God came down. 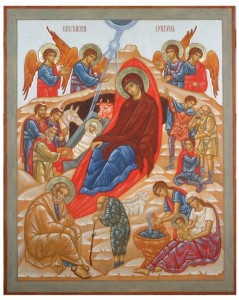 To read more about icons, check out A Reader’s Guide to Orthodox Icons.

You can read other posts I’ve written about icons here:

Where is Joseph in the Birth of Christ? (reflection on the Nativity Icon)

On the Mother of God: Women as Life-givers (icons of Mary)