Today’s guest post is by friend and fellow writer, Susan Cushman. I can’t remember now exactly how we connected, but Susan is also Eastern Orthodox and lives in Tennessee, so we have some common friends. I was thrilled to find out that she was also a writer. We first met in person at the Southern Festival of Books a couple of years ago. Susan is a personal inspiration and encouragement, and she has become a bit of a spiritual and writing mentor to me. I welcome her warmly to this space! 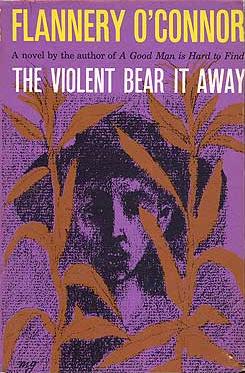 When I agreed to write a post for Karissa’s “Wednesday Wrestling” series, I was thinking I would write about my ongoing struggles with forgiveness and anger. But those demons seem to have settled down somewhat (for the time being) and their friends, sloth and gluttony, seem to have moved in for the season. So it is my wrestling with these two bums that I will write about today. But don’t let my casual tagging of them fool you—they are serious contenders for my soul.

Flannery O’Connor’s Southern gothic novel, The Violent Bear it Away, is about the battle for the soul. The title comes from Matthew 11:12: “… the kingdom of heaven suffers violence, and the violent take it by force.” Or, drawing from the Latin Vulgate that O’Connor used as a Roman Catholic, “… and the violent bear it away.”

In The Habit of Being (her letters) O’Connor writes, about her choice for the title of the book: “… more than ever now it seems that the kingdom of heaven has to be taken by violence, or not at all. You have to push as hard as the age that pushes against you.”

Whether we “take it by force” or “bear it away,” either way, violence is involved.

The commentators for the Orthodox Study Bible say, concerning this verse in Matthew, “Whoever is a hearer and lover of the Word of God takes the Kingdom ‘by force,’ exerting all earnestness and desire to enter the reality of the Kingdom. For this martyrs shed their blood, making their confession of faith, being ‘made a spectacle to the world, both to angels and to men.’ (I Cor. 4:9). The Kingdom of Heaven belongs not to the sleeping or lazy. Rather, the violent take it by force.”

Brad Gooch, in his biography of Miss O’Connor, writes that “for O’Connor the violence implied was interior.”

For most of us contemporary Christians living in America, the violence we might choose to suffer for our souls is also interior. I say “choose,” because asceticism is a choice. Fasting is a choice. Prayer is a choice. Almsgiving is a choice. Serving others is a choice. Loving others is a choice. Few of us in this country suffer physical violence for our faith today. It’s easy to let ourselves be lulled to sleep by the comfortable lives we live and to forget there’s a war going on in the spiritual realm. But if we read the lives of the saints and martyrs, we’re reminded, as the author of Hebrews wrote, “You have not yet resisted to the point of shedding blood in your striving against sin.” (Hebrews 12:4)

I’m a spiritual slob when it comes to warring against my passions. It’s easier to remain angry or hurt than to forgive and do the hard work of caring for relationships with family and friends. It’s easier to make excuses for sloth and gluttony and drunkenness than to deny myself pleasures that I think I “deserve.” So, I haven’t been doing much violence to my passions lately, but Lent has only just begun, so there’s still time to work on it. Evidently there’s a lot at stake—like the Kingdom of God.

And now I’m finishing the draft for this post on “Clean Monday”… the first day of Great Lent for Orthodox Christians. In its most severe observance, today is a complete fast—no food or drink. Well, maybe water and if necessary, a few bites of nuts. This type of eating is known as xerophagy. Another strange word if you’re not Orthodox. My husband, who is an Orthodox priest, embraces the fast whole-heartedly, but as I’ve said before, I’m a bit of a wimp in this department. But sometimes God/nature intervenes….

We woke up to a winter storm here in Memphis on Clean Monday, with sleet and snow everywhere. At 10:20 a.m. our power went out. By noon we were freezing inside our home, and by 2 p.m. we headed down to our neighborhood boutique hotel lobby lounge for warmth, a place to power up our laptops and cell phones, and, for me, a bowl of hot soup and a glass of wine. I know that doesn’t sound very ascetical, but that’s where I find myself today. And since Orthodoxy is so damn hard, I choose to take it one day at a time.

But today I also find myself free of anger and full of forgiveness, thankfulness, and love. I’m sure those feelings will be challenged as Lent progresses, and the wrestling will continue. I’m okay with that. I plan to press on with concrete and personal love. Thanks for reading.

Susan Cushman is a wife, mother (to three), grandmother (to three) and Godmother (to fifteen), and a convert to Orthodox Christianity. You can read a little bit about her spiritual journey in her essay, “Chiaroscuro: Shimmer and Shadow,” in the anthology, Circling Faith: Southern Women on Spirituality (University of Alabama Press, 2012). She has thirteen published essays, including “Eat, Drink, Repeat,” which appears in the anthology, The Shoe Burnin’: Stories of Southern Soul (River’s Edge Media, November 2013). She lives in Memphis, where she is working with an editor on revisions to her novel, Cherry Bomb, which she hopes will be published one day. She has been posting to her award-winning blog, Pen & Palette, three times a week since 2007. You can friend her on Facebook and follow her on Twitter.