Today’s guest post comes from Caiobhe (pronounced Keeva) from The Hope Diaries. I am fairly new to her blog, but have found her writing honest, authentic, and encouraging. I rejoice to have connected with this brave, spiritual, thoughtful, and creative woman. Her writing is challenging and refreshing. I’m sure you will think so, too.

I am really thrilled to be writing my first guest post for Karissa’s Wednesday Wrestling series. I outed myself as a ‘wrestler’ when I joined the Spirit of the Poor synchroblog, and after only a couple of months of blogging it is a great thing to be connecting with others who do the same!

The episode of wrestling in my life that I write about today began about five years ago. Our children were aged 9, 7 and 1 and our middle child became really sick. It was a little understood illness, but the consequence was that she stopped attending school and for the next two years became housebound. I too became housebound. My husband worked, my youngest was looked after by a child minder (babysitter) outside of the home, and friends took the oldest to and from school.

Before the illness, I had been contemplating a return to paid or voluntary work and had said these words to my husband as we took a bike ride together along a sea front during a Christian conference we were attending: “I am not sure if I am supposed to stay at home or go back to work. I really don’t mind being at home so long as I can see what God’s wanting me to do there.”

My child’s illness began with a precipitating virus which started the day after I spoke those words. I don’t believe that God brings illness into our lives or causes it, but maybe I needed to be ready to stay at home and that was the point he brought me to.  I’ll have to ask those questions in heaven, or maybe they won’t matter then. All I can say is that  as you read on I think you’ll see that God made it pretty clear to me what He was wanting me to do at home.

For the first six months I grieved for my child and her lost health, and friendships and experiences. I cried as I watched children walk to school. I grieved for my other children whose childhood was being shaped by the sickness that had entered our household. I grieved when people I thought were friends didn’t offer me friendship because they couldn’t understand why my life had become so limited, and it wasn’t that I didn’t want to see them, it was that I couldn’t. I couldn’t leave her. I couldn’t have other people in the house because noise and change caused her such huge physical difficulties that even an unfamiliar voice could send her into a decline for a week.  I grieved for the loss of my life as it had been. And I was so angry with God for allowing this to happen.

Six months into this time I went to a women’s breakfast at a local church to hear Jennifer Rees Larcombe speak. Her understanding of pain and difficulty and Jesus comes from real lived experience. I listened to her talk, and the words which seemed to be spoken to me directly told me two things: First, that we might be being called to be like Anna in the Temple (Luke 2.36 -38) because people knew where she would be. She was always there, just praying and watching and coming alongside where she saw need.  Secondly she shared a verse, which I cannot now recall but it was from one of Paul’s letters and said that we should radiate Christ’s love to others. She talked of how radiators are fixed to walls, and that sometimes we would find ourselves in a fixed position, but from there we could warm others with Christ’s love.

I listened and was shown by the Holy Spirit that these words were for me. My response was to be absolutely enraged. God knew that I was an activist, a doer, a leader, someone who got out there and made things happen. I wasn’t the person to be a radiator or an Anna. This was cruel and unkind. By the time they invited people to come up for prayer I was on my feet crying, but the tears were of rage, not sorrow. I spat out my words of anger to two  women who were there for me. I poured out my pain and my hurt and my confusion to them. When I quieted they started praying. They prayed over me with gentleness and conviction.

That was a turning point for me.  It was as if I had been wrestling and arguing and pushing against God with a conviction that this was the wrong place for me to be and if I disliked it enough I could make God change my circumstances. On that Saturday morning I wrestled hard, and like Jacob (Genesis 32) I felt a dislocation, but I also knew that I had wrestled with God. He was doing the dislocating.  For the next 18 months I held onto those two words – Anna and the radiator. I discovered that by being housebound people did know where I could be found, and although I couldn’t go anywhere to meet them, people phoned me needing prayer for difficult things. I had never been much of a pray-er for others in that way before then.  I was in my house but I was there with 4 other people in my family plus all those who came and went from our house in their capacity as nurses, tutors, physiotherapists, doctors, and I could show Christ’s love to all of them.  It was a hard few years – those words didn’t take away the pain, but I was changed in a way that enabled me to come through it.  That was love.

The dislocation was permanent.  The pain healed, but I walk differently now. 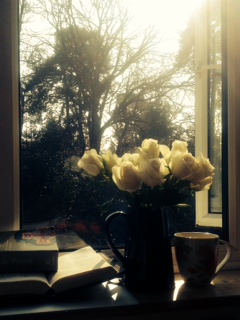 Caiobhe means “Beautiful at Birth.” It is a name we can all claim. I am writing to remember who I have been made to be, and I am writing to connect with others on that journey. I care about justice and living with authenticity. My blog is called ‘The Hope Diaries’ because despite difficult circumstances I believe the word Hope has found me this year, and I am daily amazed by the growing hope in my life which I want to share with anyone who wants to hear about it. Flowers, tea in beautiful mugs, my bible and my mac help me as I write. 🙂 Read my blog at https://caiobhesblog.wordpress.com and find me on Twitter @Caiobhe.