So my last post was about some of the wonderful people that I’ve met online and interacted with. People whom I’ve never met in person (other than one of them – yay Susan!) but with whom I have had many conversations. People who encourage and inspire me. The post actually got retweeted several times.

All of the people I mentioned were white, Christian women.

And I couldn’t name anymore. (And I only subscribe to ONE blog of the five that I named.)

But that doesn’t mean I know what it’s like to be Muslim, or that I’ve reached out a hand of friendship and understanding to people from a different religion than mine.

I’ve started using the word “canon” to describe my own personal compass, my collection of stories, both mine and other people’s, the beliefs and ideas and experiences that shape me. For example, I told someone the other day, “I just started including the stories of my gay friends into my canon.” What I meant by that was that I stopped dismissing their stories because they were “wrong” or “unlike” me. I started listening.

My canon now is different from my canon when I was 26, or 16, or 6. It’s grown a lot. But it hasn’t grown enough. If I only widen that canon enough to hold people who are exactly like me (i.e., white, privileged Christian women), then it is not yet big enough. My vision is still contained to those same old telescopic lenses through which I see the world, and I am still putting uncomfortable things at arm’s length.

The death of Mike Brown has rocked Twitter this week. Yet it hasn’t made the rounds on Facebook, and I had to actually run a search on Yahoo and Google to find the headlines about him today. In case you missed the story, Mike Brown was an 18 year old black man who was doing nothing more than walking in the middle of the street. After a brief confrontation with a police officer, Mike cooperated and was standing with his hands up, and an officer shot him multiple times, killing him.

What must it be like knowing that you must fear for your life simply because you are black?

There are several hashtags floating around Twitter, including #MikeBrown and #Ferguson, but the most intriguing one was #IfTheyGunnedMeDown. These hashtags include side-by-side pictures of people asking which picture the media would show if they were gunned down. 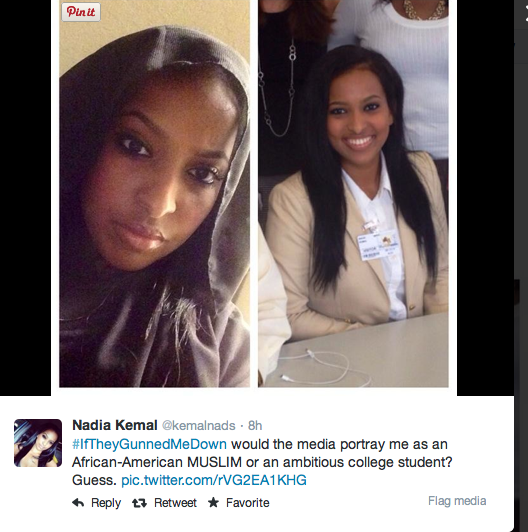 And then there was this one from a white girl: 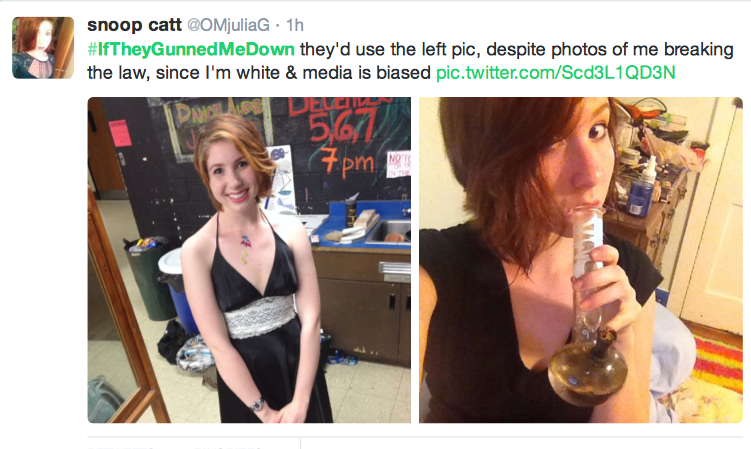 My canon expands. So not only has a black kid been killed for no reason, the media has portrayed him as a good-for-nothing hoodlum just because he’s black.

The internet has given me friends, yes. And that is something to celebrate. And to be fair, many of the friends I mentioned in my last post are regularly challenging the status quo and seeking racial, cultural, and religious understanding and reconciliation.

The internet has also given me a sobering awareness of my own race and privilege, of my own pride and power. Wrapped with that, though are the voices and stories of those outside of my realm of experience – those who are racially, economically, culturally, sexually, and spiritually different than I am. And yet somehow it feels like we are connected by our deep desire to live full lives in the spirit of peace.

I can’t control the fact that I’m white. And I won’t pretend I know what other people go through. When I was a kid, I used to wonder why God put me – my spirit, my person – in this body, with this family, in this country. But now I know that if I were in a different body, I would most likely be a completely different person, shaped by different circumstances.

So what can I do?

The first step is to listen. To open my eyes and ears to stories that might stretch open my canon.

Even that is a challenge, because I don’t want to turn this into a diversity parade, like I have to have “token” black/Asian/Muslim/etc. friends. I once heard an interview with Mindy Kaling where she said that she was tired of being asked about her race, ethnicity, and weight. She really wanted to talk about her craft. But it seemed like people were always pointing out how different she was from the “norm.” In a great post from this blog, James wrote that you know you have white privilege when “You can excel without being labeled a ‘credit to your race’.”

I realize that I have no credentials for this, and I will probably do it wrong, but:

What I want is to tear down the “norm.”

And it starts with simple changes to my own small life.