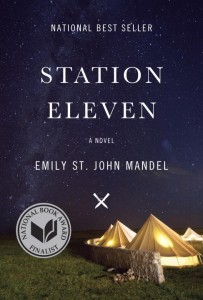 This magnificent and intriguing novel by Emily St. John Mandel opens with the line, “The king stood in a pool of blue light, unmoored.” I like catchy and mysterious first lines, and this was one. The setting was, in fact, not a true kingdom, but a stage, and the book character Arthur Leander was playing Shakespeare’s character King Lear. Unfortunately, by the end of the second page, Arthur has collapsed on stage. And thus begins the book Station Eleven.

The premise of the book is that a strain of the flu morphed into a pandemic that swiftly killed the majority of the world’s population. The book gives us stories of before and stories of after, all the characters linking in some way back to Arthur Leander. A young girl who was in the King Lear play with Arthur is now a member of a traveling theater and orchestra. Arthur’s son is grown now, and has also grown too much power inside himself. A paramedic who’d helped Arthur when he collapsed on stage walked away from his past and eventually forged a new life.

The before stories are of relationships forming and breaking, of dreams lived and un-lived, of the price of fame and the urge to follow your heart. The after stories are of survival. Escaping, looting, walking, searching, fighting, and even sometimes, killing.

What was interesting about the book was the portrayal of memory. The people who were old enough to remember what life was like before often ached with sadness for all they had lost. “No more diving into pools of chlorinated water lit green from below. No more ball games played out under the floodlights No more porch lights with moths fluttering on summer nights.”

But the younger people, those who were children when the pandemic hit, or who had been born afterwards, they, too, experienced frustration – the frustration of not knowing, of not remembering, of not understanding. Some of them had lived a life of nothing but survival. After Kirsten, one of the main characters (who was around 8 when the pandemic hit) raids a school for anything her troupe can use and comes across a skeleton in the bathroom, a friend says, “I don’t know how you stand it.”

We stand it because we were younger than you were when everything ended, Kirsten thought, but not young enough to remember nothing at all. Because there isn’t much time left, because all the roofs are collapsing now and soon none of the old buildings will be safe. Because we are always looking for the former world, before all the traces of the former world are gone. But it seemed like too much to explain all this, so she shrugged instead of answering him.

Another aspect of the story was not a person, but a graphic novel called Station Eleven. Dr. Eleven (a physicist) and a group of humans escaped alien-invaded Earth on a space station called Station Eleven. Designed like a planet but having the ability to move through space, Station Eleven was damaged in the war and its artificial sky is always sunset, twilight, or night. There was also a flood of sorts, which left only a few islands on which to live. Many of the humans have chosen to live in the Undersea, a network of fallout shelters under Station Eleven’s oceans. They want to go home, alien invaders or not. But Dr. Eleven wants to stay.

You might be reading this and thinking This is crazy. Is this a sci-fi story? This is getting weird. Let me assure you: the novel is not a sci-fi story. It is absolutely believable. And while you would think the presence of a graphic sci-fi novel might turn the plot line sour, the opposite is actually true. Station Eleven ties the book together in a perfect way. This is why Mandel, in my opinion, is a genius.

The author and artist of Station Eleven is Miranda, Arthur Leander’s first wife. After working on the graphic novel for three years, she’s asked if she will ever publish it. “It’s the work itself that’s important to me. Not whether I publish or not.” Those lines, strangely, took my breath away. I’ve been thinking a lot about what it means to be an artist lately, and how the presence of a constant audience (social media, Internet) may be changing the definition of art and artist. Is there an artist alive today who doesn’t care about audience? Is there someone who is wholly focused on his/her creation? Maybe the presence of this character, of Miranda, in this novel is my answer: Yes.

Here is the most striking thing about the graphic novel: Station Eleven most reminds me of the little Canadian island that Miranda and Arthur came from. When it came to describing a far away, futuristic space station, Miranda chose to make it look and feel like home.

Dr. Eleven: I stood looking over my damaged home and tried to forget the sweetness of life on Earth. Station Eleven, is in fact, merely a place in one woman’s imagination. Yet it is a place we all yearn to be in, a dreamscape that makes us long for home.

What was lost in the collapse: almost everything, almost everyone, but there is still such beauty. Twilight in the altered world, a performance of A Midsummer’s Night Dream in a parking lot in the mysteriously named town of St. Deborah by the Water, Lake Michigan shining a half mile away. Kirsten as Titania, a crown of flowers on her close-cropped hair, the jagged scar on her cheekbone half-erased by candlelight. The audience is silent.

The beauty of this book is that humans are able to bear a life heavy with memory. The weight of memory of the old world is so much heavier than the reality of the new world. Yet the characters survive, and beyond that – they find the only slivers of life that truly matter: Friendship. Loyalty. Love. Hard work. Compassion. Help. Hope. You don’t have to live through a pandemic to learn what this book offers you: The strength of the human spirit is unquenchable.