Spoiler alert: If you are going to see U2 on their 360° Tour, you might not want to read this.

The Nashville U2 concert (their first concert in Nashvegas in 30 years!!) was held at Vanderbilt’s football stadium. An enormous spaceship-like structure with a circular stage in the middle had been built in middle of the football field. Towards the top of the structure was an enormous 360° TV screen. The screen not only gave us the close-ups of the band, but also featured videos with Desmond Tutu, American astronauts at the International Space Station, a ton of numerical facts about the world, and clips of U2 back in the Joshua Tree days. Here’s a pic of the awesome setup from my phone: 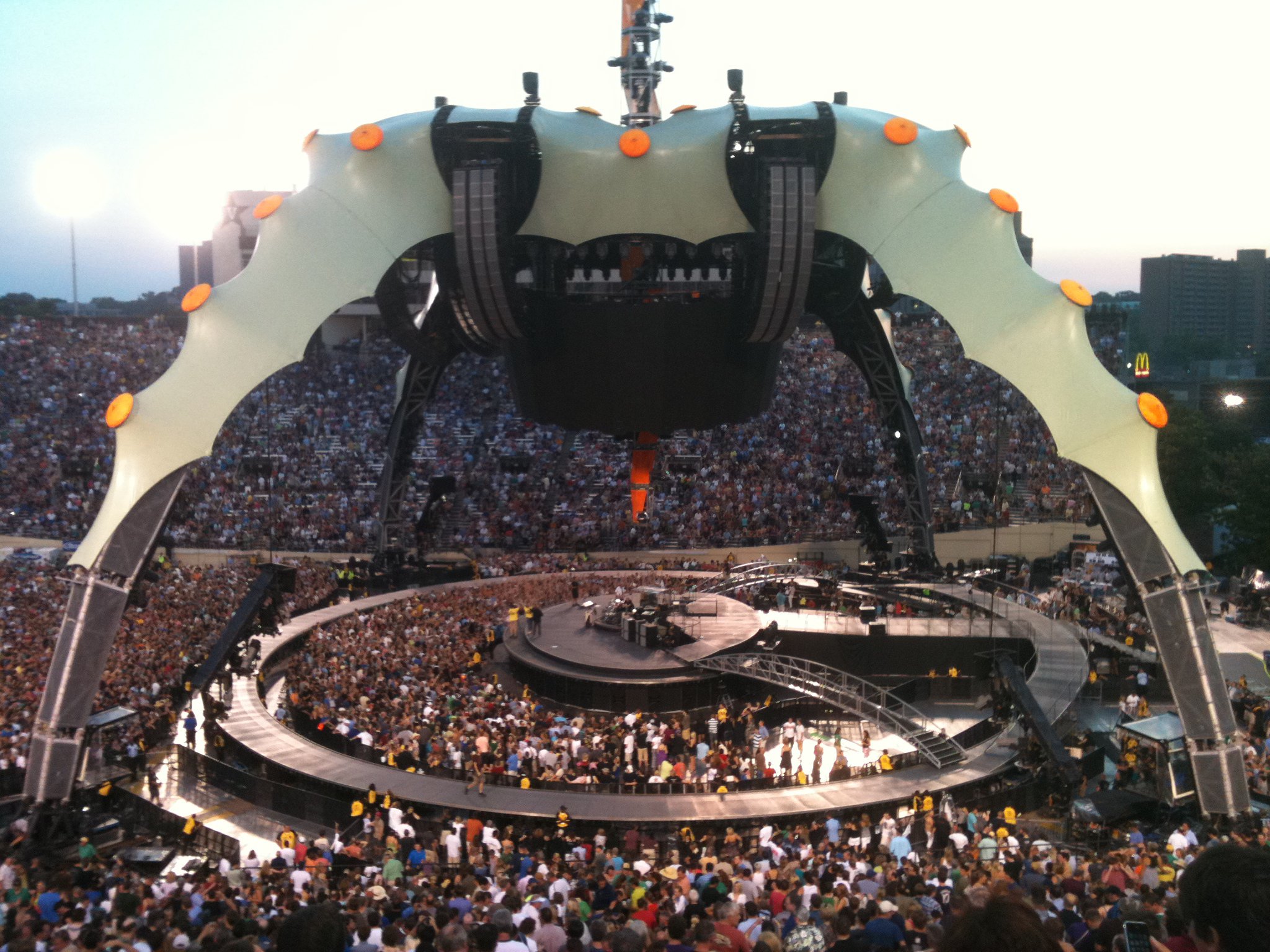 Here are my favorite moments from the show:

They were performing “Still Haven’t Found”, which was in itself an incredible moment. Then Bono whispered something to The Edge, and spontaneously broke into Johnny Cash’s song “The Wanderer,” even intoning Cash’s deep country voice! The crowd erupted in cheers.

The 360° screen featured a satellite photo of Earth from the moon side (aka the dark side) with parts of the Earth all lit up with lights, and Bono started talking about Gabby Giffords and her husband, astronaut Mark Kelly, looking down on us from the International Space station. Suddenly we were watching video of Kelly from space!!! It was awesome! Bono was like, “I wonder what his message for us would be from that far away looking down on Earth.” Then Kelly set afloat the following paper cut out words 7 Billion One Nation Imagination It’s A Beautiful Day. (Can you guess what song came next?) Then he said, “I look forward to coming home. Tell my wife I love her. She knows.” Bono echoed that: “Tell my wife I love her. She knows. She knows.”

In that moment, I’ve gotta admit I cried a little. It was like he was saying, turn to the person you love and make sure they know it. Then turn to the world and love it, too. Check out the video here. 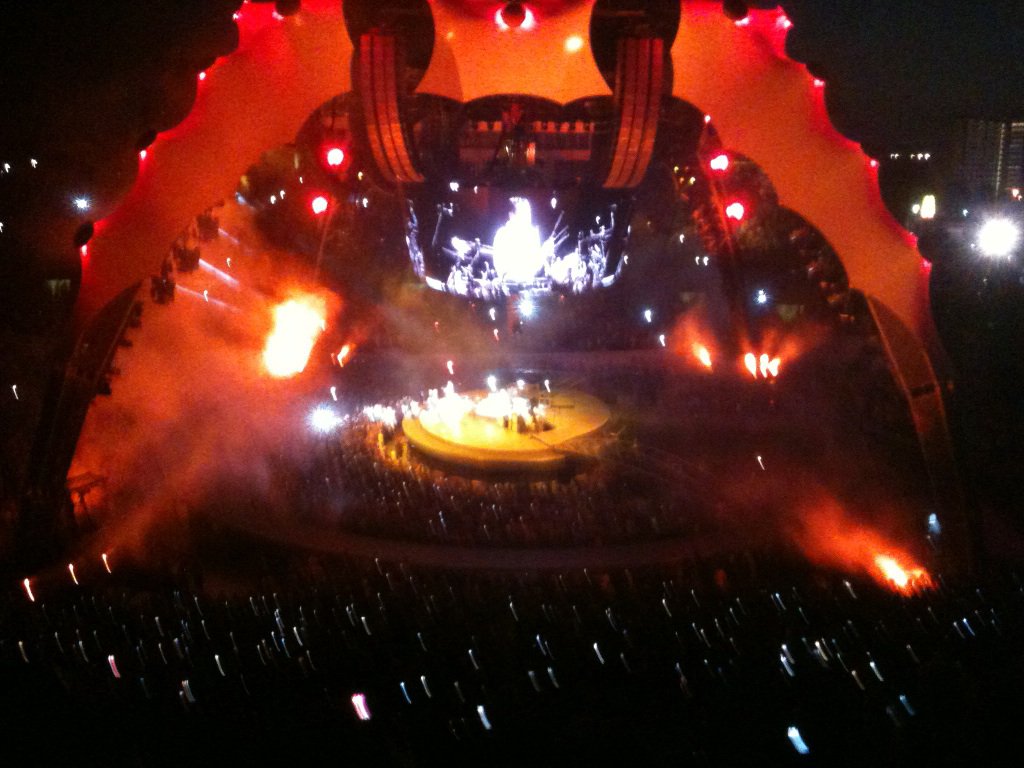 My favorite “song” moments were when they (well, we) sang “Sunday Bloody Sunday” accompanied by video stills of protesters, soldiers, and oppressed people across the world, and then  toward the end of the show when they finally played “With or Without You,” which is one of my favorite U2 songs. There’s just something extraordinary about a great song, a song that hits you in the soul, being sung by 45,000 people and U2. Music is a connector, a relationship builder, a means of bringing us together, coaxing a smile, reassuring us that there is still good in the world. This was definitely that kind of concert. Inspiring.

At the very end of the show, a concertgoer standing right up by the stage got Bono’s attention, and Bono brought the guy on the stage and goes, “Get my guitar! This guy wants to play something!” You can see the guy holding a sign in this photo: 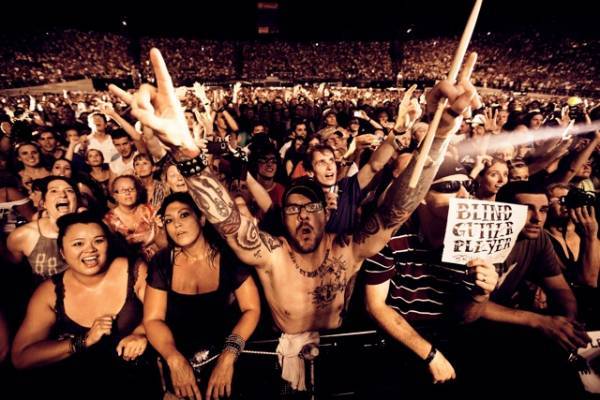 The man was a blind guitar player and wanted to play “All I Want Is You” for his wife. It was incredible. The guy got to play guitar for Bono! Afterwards, he started handing Bono’s guitar back to him, and Bono gave him his guitar! The crowd absolutely went wild. 360° of awe, hysteria, and yes, love.

So here’s my song  – for Steven, my children, my family, my friends, the poor, the suffering, the world:

You say you’ll give me a highway with no-one on it
Treasure, just to look upon it
All the riches in the night.

You say you’ll give me eyes in the moon of blindness
A river in a time of dryness
A harbour in the tempest.
All the promises we make, from the cradle to the grave
When all I need is you.

You say you want your love to work out right
To last with me through the night.

You say you want diamonds on a ring of gold
Your story to remain untold
Your love not to grow cold.
All the promises we break, from the cradle to the grave
When all I want is you.