I bet that title conjured up images of the beautiful lit-up ferris wheel at the county fair, or maybe kiddie games and face painting. 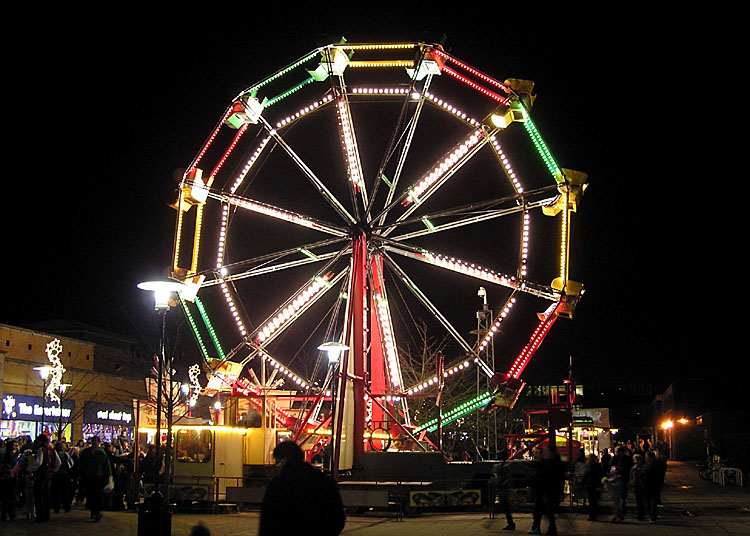 The carnival I took my son to last night was neither. Yes, it had a ferris wheel and other mid-way rides. It had cotton candy and funnel cakes. It had stupid go-fish and shoot-the-balloons and throw-the-dart games.

But the rides looked like they were 40 years old. These were the rides the county fair discarded. The “fun house” only had two working features. The super slide, which typically has foam or plastic mats you slide down on, had old burlap potato sacks instead. When we rode the carousel, the attendant had to literally give it a push to get it started.

A few of the workers were Latino and spoke little English, which doesn’t bother me, because I love practicing my Spanish, but it did precipitate a funny moment. When we got on the carousel (which adults could ride, according to the sign), I hiked myself up onto a horse right next to Ephraim. The attendant came over, pointed at me, and said, “Too big.” For a slight second, I thought are you calling me fat? (I am a size 10-12. Not skinny, but not that big!) Then I realized that given the age of the ride, there was a risk of the horse collapsing under me, an experience I’d prefer to avoid. So I just stood.

Despite the impending danger I felt on every ride, my son had a blast. His favorite rides: bumper cars, super slide, and the mirror maze.