Last night I the kids and I hung out at Davidson Academy (Steven’s work and my kids’ school) for a while to hear a couple of bands play. Steven was in charge of this on-campus retreat thing yesterday and today. They’ve had chapel, done service projects, had a bunch of games and activities, and last night they had a concert. As I expected, Ephraim was ready to go after two songs. Madeleine wanted to stay for a while, though, so I told Eph he could go hang out in the cafeteria while Mad and I stayed in the auditorium for a few more songs. (Such a responsible mom I am!) The guys in the first band were young, and I think the band is fairly new. It was their first gig in Nashville.

I once lived that life . . . kinda. Steven was in a band – well, actually two different bands for a while – when we were first married. Oh, here’s the proof: 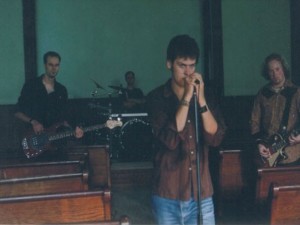 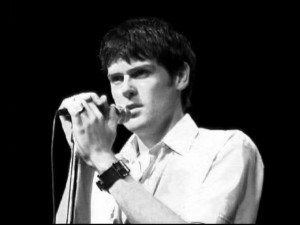 It was a pretty fun ride. Our early marriage was filled with late nights going to hear the band play, me selling merch and trying to look as cool as possible (including one time when I was trying to “shape” my eyebrows with a razor blade and accidentally shaved half an eyebrow off!), hanging out at the recording studio, and me drooling over my hot hubs and sometimes wondering why in the world he had ever picked drab ole me.

The music scene was better in Nashville back then, too. We had Dancin’ in the District and Uptown Mix and Riverstages. My girlfriends and I usually hit Dancin’ in the District every Thursday night, and Steven and I once got to hear Ben Folds at Uptown Mix. My friends and I started following a couple of local bands, and between Fellow (Steven’s band), Ligion, and Bombshell Crush, suddenly I was a regular participant in the live music scene. It was a rush for a while. There’s just this palpable excitement that comes with hearing live music, particularly in those smaller venues where the musicians are just a few feet from you and the audience crowds around and breaks into spontaneous dancing and singing along. I dyed my hair white-blonde and was always on the lookout for “going out” clothes. I loved the music, but I also loved the feeling of being on the edges of cool.

Eventually the whirlwind died down. Fellow split up, and I realized I was spending more time on the weekends going downtown with my friends than with Steven. And then I got pregnant, and that kind of put an end to my groupie days.

Going to see a band looks a little different now. We went to see The Swell Season at the Ryman, and I don’t think there was anyone under 30 years old there. There were no flashy lights or costume changes; there were these incredible, humble, talented musicians and their music. And that was absolutely fine with me.

Don’t get me wrong; I still like a good concert. And I’ll always treasure those fun times I had in my twenties. But the thirties are changing me. I don’t look for the adrenaline rush as much anymore; my life is so busy and loud that I crave stillness, quiet, and beauty.