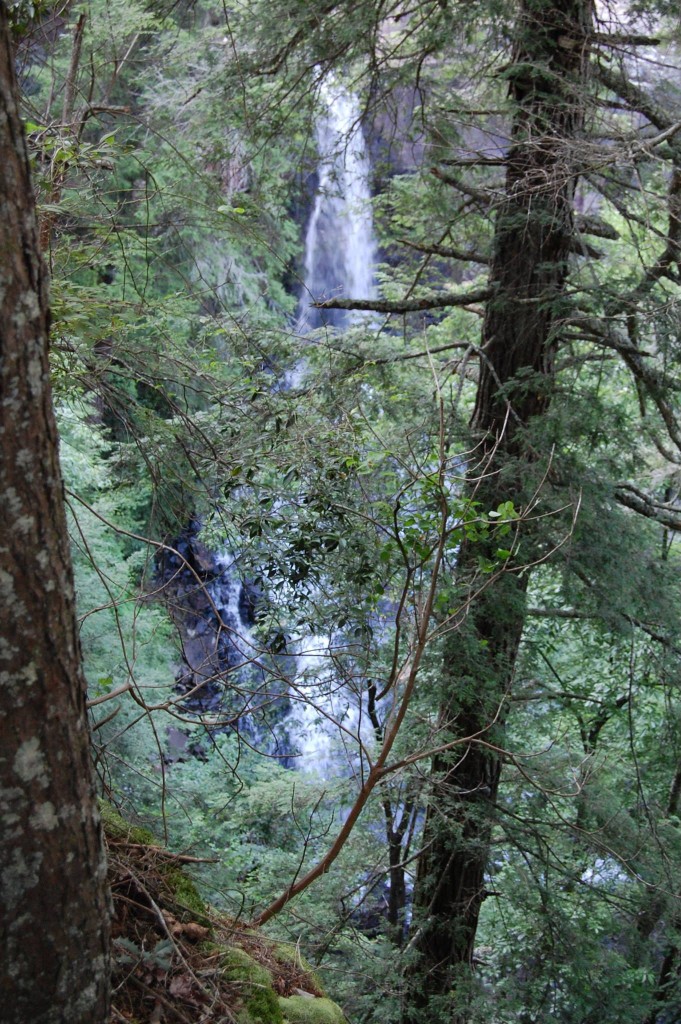 I spent most of my weekend away from internet and social networking and regular life and instead, hid away in nature. Took a breath. Took time for silence.

We set up our tent in a neighborhood of mostly campers and RVs, the kids arranging the sleeping bags just so. Two little boys sped past, barefoot and on bikes. The people across the way came over with their dog, telling us of all the places they’d camped this summer. We played charades around the fire, made smores, and the kids held the flashlights under their chins and made up ghost stories. When we all lay down, the wind sounded not unlike the foamy waves of an ocean. I could see stars through the leaves, and the bright moon. It felt like a different planet, one where I could breathe in nothing but beauty.

The next day the four of us hiked down to the bottom of a waterfall and waded in the icy cold early morning water. Ephraim found an abandoned walking stick, which helped him on the hike back up. It matched his fedora, which he had insisted on wearing, quite well. We stopped a few times to look at creatures: millipedes, spiders, frogs. We pushed back branches and hopped over logs in the trail and tottered over suspension bridges. I walked in silence for much of it, taking in the quiet, relishing the distance from my real life, with all its comings and goings and responsibilities. Later we came to a swimming hole, where we waded in the cool, lively water, and I marveled at the simplest pleasures: a school of tiny fish, a heart-shaped stone, the warmth of the sun on my shoulders.

From there we went to my in-laws’ house. They have a beautiful back porch, an outdoor room of sorts, with greenery and a little fountain and some comfortable chairs. From the window, I watched bluebirds fly in and out of a birdhouse on the porch. There were two of them; mates, I presume, and each time one would poke its head into the hole, it would have a little twig in its beak. They were making a nest.

After a few minutes, I went out to the porch to read in the morning stillness. Though I was quiet, the bluebirds noticed me. They would fly up to roof and perch on the gutter, holding their twigs, then fly back into the yard. This would repeat, over and over, the click of their feet tapping on the gutter above my head. But neither of them would fly to the birdhouse while I was sitting there. I felt guilty for encroaching on their space.

Once, people and nature lived in harmony; there was no such thing as encroaching. Humans and animals shared the land in peace. The world’s come a long way since Eden.  I looked down and saw a butterfly slowly opening and closing its wings. It appeared to have landed in a puddle of water on one of the square garden stones and gotten its wings wet. I found myself longing for that paradise – Eden, perfection, life. Would the butterfly live? I didn’t know.

I went inside to let the bluebirds work in peace. I finished my book, The Lake of Dreams by Kim Edwards. It was a beautiful, poetic book – dreamy and comforting, and another voice, a voice among many that have been gently tugging at me since February, asking me to re-consider myself. Growing and weaving something lovely, like the vines and flowers and women on the stained glass in the book. Longing to be outside again, I peeked out the window and didn’t see the bluebirds. I slipped back out onto the porch, and looked for that butterfly, fearing the worst. It was gone. Its wings had dried, evidently, freeing it to fly again.

You live here, the stories all said, but you are filled with the breath of the Divine, and the world in your care is full of amazements.  – Kim Edwards