Today’s guest post comes from fellow writer and Thailand MK Briana Meade. Briana and I found each other on Twitter and have become fast friends. Briana is a talented writer on faith and motherhood and spent much of her childhood in Thailand just like I did. I appreciate her honesty and story of growth in this post.

I think I’ve always believed that I’m implicitly bad—you know, that I started out bad, and then God came and saved me and I was made good. This is the first message I remember receiving in Sunday school:

God is good. We are bad. Jesus saves.

This was imprinted on my heart at an early age: that the core of me was marred with sin from the start. Later, I would hear Christians talk about babies being born with a sin nature.

I’d think about this when my own children were born, wriggling with blood like so many of the sacrifices in the Old Testament, helpless to their own destiny, already tied tightly—like a lifeboat tied to a ship—to death.

Did my babies become sinners when they left the womb and hit oxygen, breathing in great big gulps of darkness? Was sin woven into my children’s DNA with proteins I donated that were broken and twisted beyond repair?

Such is the paradox of being born: In the very process of coding life into my children I have also coded death, long reams of proteins with sinister implications.

We are complicit in every sin act after the first, exponentially re-generating sin in our very natures, in sex, and through giving birth. It is the creative act holding hands with destruction. Birth establishing the finality and irreversibility of death.

There’s some scientific research that implies that our decisions and choices can have a profound effect on the genes we pass down to our children. That a person might adjust his genes so as to effect his children and even his grandchildren, perhaps “choosing” a predisposition towards alcoholism for every future generation.

This goes against what genetics used to think: that we were completely erased and re-built from scratch through the composite of our parent’s genes . Now, we’ve realized that genes can be turned on and off during a lifetime. This field of research is called epigenetics.

What this suggests to me, though I have no idea if it is scientifically accurate, is that the decisions I make in my own lifetime prior to having children reverberate into their destinies and identities—my worrying, bad habit of nail-biting, compulsion for aspartame.

We’re linked sin-to-sin-to-sin with our grandmothers and mothers, our fathers and daughters, walking on tightropes strung over canyons that we did not choose ourselves.

This might be why I have the feeling that good doesn’t seem to stick with me, that it slides off of me like water dripping off from baptism. The purity is there, and then it’s like it’s not.

If only purity could be a thick coat like the slick oil that table-cloths the ocean after a spill. I want it to weight me down with a sheen of goodness that is resistant to all but the strongest of dispersant.

I’m working out my faith, but with some confusion and haphazard flailing here and there. I guess you could say I’m wrestling, though I feel like my whole life has been in this state, churning and wondering and wandering.

Chris and I became members of our church recently. At the meeting, one of the elders talked about the Presbyterian view of Genesis. He used two words when he talked about creation that struck me, in light of everything I’ve understood about humanity. He said that God created human beings with dignity and worth. That at the beginning of time, Adam and Eve were not just friends with God, but that they were good. God looked at everything he had made and called it good.

Imagine Adam and Eve standing there, perfect and special and unique. Confident in their beauty and loveliness. These wonderful human beings, everything we had always hoped and dreamed of being.

Maybe what I’m really saying is that my soul remembers a time where I was whole. I’ve been wrestling to return there, ever since. Longing for the time where was known in the garden, for the closeness that I’ve only tasted in the briefest of moments—if at all.

We’re moving on a conveyer belt towards redemption, the fixing of the broken toys by the master toy maker, but once-upon-a-time we were made right, and maybe that’s why this longing and knowing never seems to end.

He is the Truth that brings us home. The one with the capital “T” that illustrates all I am begging to believe. The white robe, the covering of the saints, the broken body broken again for me. 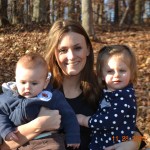 Briana Meade is a twenty-six year old blogger and writer at brianameade.com. She also grew up in Thailand (like Karissa), but hasn’t got the gumption to write about it much yet. She mostly writes about faith and motherhood, in an attempt to get back to what is true and figure out how to live in this wild world. Follow her on Twitter @BrianaMeade.