Today’s post comes from my friend Bree, who I met on the internet. We’re on opposite sides of the globe, but I’d say we’re kindred spirits in our search for an authentic God and an authentic faith. Bree’s words today are quite beautiful and showcase her poetic voice. To read more of Bree’s work, check out her blog.

I didn’t find him in church, though I caught glimpses. I didn’t find her in the bible, though sometimes I could almost hear a gentle whisper in the soft crinkling and turning of those aged pages.

I found him in the silence.

I found him on the slippery slope, the place I was told was dangerous.

I found her in the supposed sacrilige of a shifted pronoun, she was there too. Though not many were looking. I found her in birth, in blood, in the softness and fragility of my babies.

I found her in the swiftness and exhaustion of a summer night, leaning into the feathered wind, in feeling her wings lift and enfold. In nestling. In calming my feverish mind. It was then I felt born, in blood and softness and fragility – found.

In the unfolding and the collapsing and the being reborn, in the decomposing, the composting into the the warm and firey earth, in the verdant shoots breaking through the loamy soil. Sometimes I have to dig my fingers into the earth, just to know it will still crumble, just to feel my own substance.

And still, I find him even when I don’t.

Even in absence, I find a presence in the existence of all things. In the gentle heaving of life that branches out its tendrils, in the way that a tree forks like lightning, and rivers flow like blood vessels, and in the way the clouds can ripple like sand in the sky and our universe unfolds in its majesty to bear the synaptic image of the great mind. I find her in the one-ness of creation.

I found him inhabiting the other, just as much as me. I found him in those cast aside, I found her fingers and lips smothered all over them, the way that a mother envelopes a stinky, misbehaved child.

I found him in other people. And in the slow revealing of becoming less and paradoxically more. I found her in the stripping back and the not doing.

I found, I found – in my own process of being found, myself.

And discovered it’s not me who’s doing the searching, anyway. 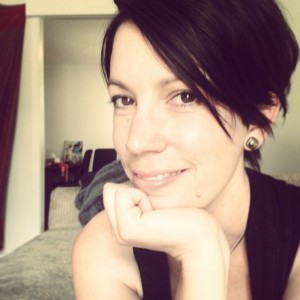 Bree is a recovering perfectionist learning to live life under the assurance that it won’t go to plan. She’s a mother and a wife, a lover of stories, and a self-confessed personality-geek. Bree is passionate about connecting people in community and runs a group for Aussie Female Faith Bloggers: The Priscillas. She would love to connect with you on twitter @failingjoyfully, Facebook, and her blog, www.failingjoyfully.com.