I can’t remember exactly how I found Suzanne from Tattooed Missionary, but when I stumbled upon her blog, I found a gem. I mean tattoos and missionaries? Two of my favorite things! Suzanne is an ESL teacher (Woot!), reader, writer, and world traveler. I love her stories about faith, cross cultural experiences, and finding (and loving) her authentic self. I especially love her guest post today! It’s funny, challenging, and hopeful. Enjoy.

Where I Found God: Face Down in the Mud

I found God face down in the mud.

During my last semester at a Christian university I, at the last minute, enrolled in a class called Contemporary World Missions. The professor was a professor I had been hearing about my entire college career. A professor whose classes I just had to take. He was known for social justice and advocating for the least of these. Even more so, he was known for the weekend-long simulations that his students had to experience in order to pass the class. The simulation for Contemporary World Missions was a Refugee Weekend, and it was no walk in the park.

I saw the people we were learning about in my dreams. I saw them when I was awake. I saw their gaunt, dying faces. I saw their beaten, broken bodies. I saw their lonely, displaced families walking for miles and days and weeks and months. I saw their dead loved ones, left on the side of the road. Their suffering haunted me. I looked for God in their faces, but I could not find Him.

I became frustrated with my professor. “But surely there is some good in the world! Humans aren’t all bad. Right?” I clamored. “Where’s God?!” I demanded. And he nodded, a wise, knowing nod, and went on to the next slide of modern horrors. He knew that the search for God in the mess was possibly the most important part. Where is God, indeed? I looked for God in the slide shows and the startling statistics, but I could not find Him. I felt frustrated and sad and alone.

Then came the weekend. The weekend. The weekend I was to spend with 60 other college students as a simulated refugee. Only a couple of hours into the experience I remember thinking, close to tears, “I don’t want to do this anymore. I want to go home.” But of course, that wasn’t an option. And it wasn’t and isn’t an option for the thousands of refugees and displaced whose lives aren’t a simulation, but are real, real, real – more real than I can imagine, even knowing the startling statistics. So I bucked up and kept walking, kept getting down, kept peeing in the woods, kept my head down.

We spent a large part of that first day walking. It was a simulation, yes, but the hours we spent on our feet were real. The hours we spent imagining what, or rather, who, was going to pop out at us next and with what weapon were real. The hours we spent imagining the real refugees who spent hours and days and weeks walking away from their homes, walking toward the unknown were real. In the Ohio in February cold, I needed something to keep me going, to push away the thoughts of, “I want to go home,” and even to push away the reality of the thousands that have no home.

I have never been in a real fear-for-my-life situation. Deep down, I knew my life was never really in danger during that weekend. That reality was deeper down in me at some moments than others and it was in those moments of desperation that I found God. Or more precisely, He found me. He came to me in song lyrics.

When I had nothing else to hold to, when the statistics became people with skin on, real desperate people doing real desperate things with real fists and feet and guns (not loaded, but still very threatening), I didn’t even have to look to God to find Him. He just showed up, armed with truth and faithfulness.

Living a comfortable white, middle class American life can lull a person into a false sense of security. A false sense of, Yes, God is nice and I enjoy church and reading my Bible, but do I really need God? Because I’m alright with not being perfect and I’m alright with doing this Christian thing on my terms and I’m alright with being comfortable. I’m alright with holding on to my stuff. But when I was face down in the mud, my stuff and my church and my Bible and my terms were nowhere to be found. Even my Christian University knowledge was unhelpful to me. The only thing my mind could muster up among the fear and the cold and the pain (all very not-simulated) was the truth of what Jesus has done, who He is, and what He has promised to do.

I found God in the place where I had nothing but the clothes on my back. I found God face down in the mud. I found God and I realized that, praise Him, He is the only thing worth finding. 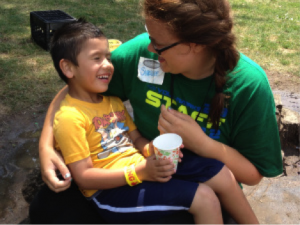 Suzanne went on a mission trip to Mexico when she was eleven. Since that day she knew she wanted to teach English in a Spanish speaking country. Now she’s living the dream, teaching First Grade at a bilingual school in the Dominican Republic. When she’s not being used as a human Kleenex and putting bandaids on imaginary boo-boos, she’s probably reading about writing or writing about reading. She likes cats, Netflix, and cultivating a healthy self-esteem. You can find her blabbing on about fictional characters and being a single 20-something at her blog, tattooedmissionary.wordpress.com.