The next poet for poetry month interviews is Nicole Rollender. I welcome her to my space today!

The simplest answer is that I write because I can’t live a life of not-writing. Though I’m reluctant to use the word compulsion here, I am compelled to write. I write to survive. I also write my way out of loneliness, fear, despair and other feelings that start in what can become one’s personal abyss. I write because I realize that as we live on earth, we’re moving toward an afterlife. So how do we live fully when we’re at every moment approaching death? This theme of questioning and a redemptive carpe diem often inhabit my work.

It’s really difficult to narrow down to one favorite poet, but recently I’ve been in conversation with Anne Carson’s work about our dual life as humans – our “withness” with our bodies, and also our knowledge of God and his afterlife that move along next to us as a disturbing shadow. Also, Anne Sexton’s The Awful Rowing Toward God, where she’s essentially dissecting herself and trying to put herself back together, while also reaching for a distant God: “I who wanted to crawl toward God/ could not move nor eat bread./ So I ate myself/ bite by bite” (“The Sickness Unto Death”). This is at the center of our struggle: inhabiting a body that eats, has sex, gets ill, births, defecates, while also trying to uplift a complicated spiritual self. Can one achieve physical and spiritual bliss simultaneously?

While interacting with these poets’ work, I wrote a short chapbook, Bone of My Bone. Through the half-lit poems in Bone of My Bone runs a troubling line of questioning – what’s beyond this life? – as my narrator contends with death on a very visceral level: “The hip is something/ no longer examined in the light.” In these poems’ rooms, which are like the ruins of a cathedral open to a night sky, the haunted narrator explores the real ways that we take which is ours, both in this life and in the next. There’s a chance to seize at “what is also the divine: There is no saint/without a past.” This chapbook, which was a winner in Blood Pudding Press’ Chapbook Contest, is forthcoming this fall.

A poem for me starts as a single image and then a series of images that I’ve collected, usually disparate, often discordant. I’m a free-verse writer who’s interested in lyricism, word choice and associating imagery in a loose way, to somewhat tie up the chaos from which the poem originates. I seem to resist inherited forms in my poems, but I embrace rhyme (incantatory, slant, assonance, fragmented) and repetition throughout the poem. Poems to me should read like a song, or a meditative prayer, that marry imagery and sonic pleasure. I play with sound to create accord and discord. I want readers to be a little disturbed when they leave my poems’ rooms, but to also have experienced moments of beauty.

I always write my drafts on my laptop in Garamond. I have a notebook that I use for jotting down ideas, phrases and lines. But I always do my actual writing and rewriting on the white screen. Writing happens early in the morning or at night, since I work and also have small children. I’ve developed the odd habit of emailing myself my drafts almost obsessively. It’s like getting a communication from an old friend from faraway. When my inbox pings, I read the poem aloud, also looking at how it looks on the page. When I hit a word or point where the poem doesn’t work for me, I hit delete and return to my draft. During one sitting I’ve actually counted up to 50 drafts that I’ve emailed myself as I work through a poem. I’m a constant rewriter. It takes a lot for me to say a poem is done.

I used to take rejection as a referendum on my work. However, in the last couple of years, as I’ve gotten to know more poets, I realized that rejection was standard for everyone since there are so many writers and so few slots in literary magazines. Plus, many poets who snagged an acceptance to a top-tier journal will reveal that they had to submit that poem up to 50 times to get that “yes.” To add to that, a mentor told me that I was getting too many acceptances, meaning that I was subbing to too many journals with high acceptance rates. She encouraged me to start sending work to journals with much lower acceptance rates. When I did that, my rejection rate skyrocketed, but then I also got acceptances to a couple of my dream journals. Rejection definitely doesn’t affect me as much as it did before, since it really is just part of the process. I do find it helpful to share news about rejections with other writers, just as much, or more so, than acceptances. I always chuckle when I think about the anecdote of how disgusted Franz Wright was when he received a rejection from Poetry, the day after he won a Pulitzer Prize. It helps to know that none of us are immune from rejection.

How do you want your poetry to influence other poets, or society, or both?

I don’t know if I have any specific mission for how I want my poetry to influence anyone: What I do know is that I want it to be involved in some sort of conversation, whether it’s with a reader 1,000 miles away from where I write, a high school student who says, “Hey, that’s kind of how I see my poems evolving,” an editor of a women-centric who asks me to submit some of my work. This year, after a seven-year hiatus from publishing (I grew my career as a magazine editor, had two children), I have two chapbooks and my debut poetry collection forthcoming. I feel it’s important to write poems, and then build small collections and then book lengths, and feed them out into the world. Poetry also talks to each other. Our work influences each other’s and adds to the larger conversation that they inhabit – like motherhood, mysticism, inhabiting the body.

I’ll answer this question from my experience. My poem, “Necessary Work,” won Ruminate Magazine’s 2012 Janet B. McCabe Poetry Prize, chosen by Li-Young Lee. After my first child was born premature, I went through a period of post-traumatic stress, as I constantly worried about her milestones and health issues. During that time, I didn’t write much, if at all. Finally, I wrote this poem, which went through several incarnations. It was cathartic to do so – it felt like I was harnessing the grief and stress I felt and channeling it into the poem. Of this piece, Lee wrote, “One can sense the poet sorting the music of thinking and feeling from the chaos of an outsized undifferentiated passion. But above all, it is the passion that I love about this poem, and how that passion is canalized by discipline to create a work of profound beauty.” This experience moved me back into writing, and into a more normal equilibrium. I view “Necessary Work” as the poem that saved me from despair. That’s what one of poetry’s essential functions; it’s the rope that pulls us out of what can destroy us.

What are you working on right now?

I’m working on a series of prose poems, with each sentence or phrase linked by a colon. They’re psalms for my daughter – each meant to be read or considered while doing some quotidian thing for your child, combing her hair, checking on her loose tooth, watching her dance around her room before she gets dressed. The full sequence will appear in my debut poetry collection, Louder Than Everything You Love, that’s forthcoming from ELJ Publications in the fall. When I wrote the first psalm, it was an easy process. As it so rarely happens, the poem came almost fully formed – something about its impetus, this intimate interaction with my daughter, where I felt like I was telling her what I was so scared to lose, how part of me is growing in her, how much we have intertwined. One of these pieces, “Psalm to Be Read While My Daughter Looks at Her Ribs,” was recently published in Rogue Agent – part of it reads: “she knows her body is made well: she/ doesn’t know someday her body will fall apart and sleep under the flowers she also loves:” These poems developed into meditations on motherhood – and how the body becomes a creatrix, and yields another body.

One of my favorite recently published pieces is “Light Work,” which appeared in THRUSH Poetry Journal that’s edited by the wonderful Helen Vitoria. “Light Work” is a multimodal prayer-like poem, meant to be read either across the two columns, or down each column. When read across the columns, I wanted there to be a leaping effect that offered breath, but also the feeling of hurling over a spiritual chasm.

This poem is about the struggle with depression and the search for God among despair – the narrator is envious of her mother who seems to have found a church-home, and also of the female saints who killed themselves to avoid rape and were called holy. There’s an underlying violence (“unstitch people who eat/ secrets”; “a man hammered/ out her teeth”; “prayer bone’s steady gnaws/ and groans”) that slowly gives way as the poem winds to its close, as the narrator hides in the forest to escape saints who are searching for her with lit torches.

While writing this poem, I worked to achieve hard, enjambed lines juxtaposed with more fragmented, floating lines that repeated, echoed and rhymed. The last lines, “Mother, I’m hiding/ I don’t come home,” resonate for me as illustrative as the struggle to pray, to be spiritual, to find God, whether out there or in our bodies. That luminous, yet knuckled-in-the-direct struggle is “alight on lit bone.” 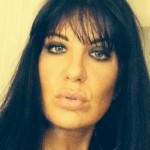 Nicole Rollender is assistant poetry editor of Minerva Rising Literary Journal and editor of Stitches. Her work has appeared or is forthcoming in Alaska Quarterly Review, Best New Poets, Harpur Palate, Salt Hill Journal, The Journal, THRUSH Poetry Journal and West Branch, among others. Her full-length poetry collection, Louder Than Everything You Love, is forthcoming from ELJ Publications. She’s the author of the poetry chapbooks Absence of Stars (dancing girl press & studio), Arrangement of Desire (Pudding House Publications) and Bone of My Bone, a winning manuscript in Blood Pudding Press’s 2015 Chapbook Contest.  She’s the recipient of poetry prizes from CALYX Journal, Princemere Journal and Ruminate Magazine. She earned her MFA in poetry at the Pennsylvania State University.  Find her here: www.nicolerollender.com. Connect with her on Twitter, Facebook, or LinkedIn.