My next poetry month interview is with my friend Pamela Johnson Parker. She and I were in Murray State’s low-residency MFA program together, and she got me through my first couple of semesters when I completely doubted myself!

The world is a wonderland, as Alice discovered; it’s “curiouser and curiouser.” I try to make sense of time, travel, travail through language.

Today, my favorite poet is John Keats for his lush language, palpable imagery, and the essence of narrative contained within his odes (the way perfume contains a top note, the essence of flowering). Frank O’Hara, Tennyson, Galway Kinnell, Elizabeth Bishop, Marianne Moore, and Alexander Pushkin are also touchstones.

I have at least three lines and a rhythm in mind before I start to write a poem down. I like to pace out a few lines before I put anything on paper. After that, there are copious notes, all by hand. I think that reading, research, and reflection are big parts of the process. Also, my motto is “Sit there till you get there.” I believe in being present.

I write in a journal, five days a week, first thing in the morning. After that, I walk out the poem or essay or chapter. I write everything—poems, novels, reviews, essays—by hand. I believe in muscle memory, and I believe in showing up.

There’s a “dream journal” whose editors have rejected my essays innumerable times. I keep on sending them what I consider to be good work—and I believe in the work I send out. Persistence pays off. For example, “Some Yellow Tulips” was rejected 63 times before it found a home. It was subsequently nominated for a Pushcart, so publication’s a lottery.

I’m a writer, someone who writes. Artist, author—those words suggest resting on laurels. I don’t have, nor do I particularly want, accolades. I want readers, so I write and send out work.

Here’s my stock response: I can’t tell you why the world needs poetry, but I can tell you why I needed—and continue to need—poetry. I had an illness in 2009 that affected my speech, coordination and memory. My neuropsychologist was amazed that I could immediately recall poems, whole stanzas of them. I made one of the quickest full recoveries he’s ever witnessed. I give credit to Shakespeare, Bishop, Keats, Frost, Browning, Cummings — and also to Mrs. Pember, the 7th-grade teacher who made me memorize poems as a penalty for talking in class. (I wrote this in 2010, and I still believe it to be true).

“An Attempt at Epistolary” is written as homage to Marina Tsvetaeva’s “An Attempt at Jealousy.” I wanted to try a more operatic voice, one that’s definitely out of the range of my normal Kentucky drawl. This poem took about two weeks to write and three months to revise. I sent it to my first readers, Sheila Sanderson and Chet Weise, then I sent it out. Because of its length, I thank Patty Paine and diode for taking this poem. 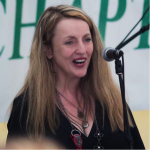 Pamela Johnson Parker works in the Department of Art & Design at Murray State University and is a freelance medical editor. Her work has been featured in anthologies such as Poets on Painting, Best New Poets 2011, and Language Lessons: Volume 1 (Third Man Press). Parker’s poetry collections include A Walk Through the Memory Palace (Phoenicia Press) and Other Four-Letter Words (Finishing Line). Two novels, Horn & Hardart and Bedbound, are currently languishing in someone’s inbox.